The City Center District is an area in north-central downtown Dallas, Texas (USA). It lies south of the Arts District, north of the Main Street District, northwest of Deep Ellum, southwest of Bryan Place and east of the West End Historic District. The district contains a large concentration of downtown commercial space which prior to 1950 had been concentrated along Main Street. The district also contains remnants of Theatre Row, the historical entertainment area along Elm Street which contained theatres such as the Majestic Theatre.

as well as several other building & parking structures 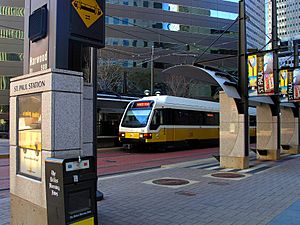 All content from Kiddle encyclopedia articles (including the article images and facts) can be freely used under Attribution-ShareAlike license, unless stated otherwise. Cite this article:
City Center District, Dallas Facts for Kids. Kiddle Encyclopedia.