Cooks Monument and Reserve is a heritage-listed memorial at Charlotte Street, Cooktown, Shire of Cook, Queensland, Australia. It was designed in the office of the Queensland Colonial Architect and built by Hobbs and Carter in 1887. It was added to the Queensland Heritage Register on 30 April 1997. 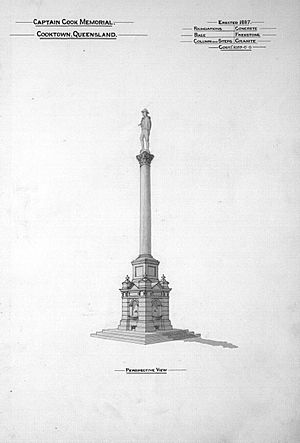 The Cook Monument at Cooktown was erected in 1887 by Hobbs and Carter of South Brisbane, to designs prepared in the office of the Queensland Colonial Architect, George St Paul Connolly.

Cooktown had been established in September 1873 as the Endeavour River port for the Palmer River goldfields. By the mid-1880s it was serving one of the most significant goldfields in Queensland. A railway was constructed from Cooktown to Laura between 1884 and 1888, further opening the port to development. By the late 1880s Cooktown had become the important centre not only of a thriving mining district (boosted by the 1887 discovery of tin along the Annan River), but also of pearling, beche-de-mer, and pastoral activity. After 1885, Cooktown was also the main port for Queensland trade with New Guinea.

In May 1886, the then Premier of Queensland, Sir Samuel Walker Griffith, travelled to Cooktown and other northern ports on a tour of inspection, partly associated with defence issues, more with political strategy. The Separation movement was gaining momentum in Townsville and the far north, and Griffith was keen to demonstrate his government's commitment to, and concern for, northern Queensland. The Cooktown Municipal Council at this time was seeking to commemorate James Cook's encampment at the Endeavour River in the winter of 1770, and it appears that Griffith, as political expediency, committed the Colonial Architect's office to designing the Cook monument at Cooktown.

The Cooktown Municipal Council had intended that the monument include a statue of James Cook, but when tenders were called in June 1886, then again in September 1886 and February 1887 with different materials specified, they were for the column only. In December 1887 Sir Samuel Griffith re-visited Cooktown, and when requested by the mayor to provide assistance in commissioning the statue, refused, stating that it was more important to commemorate the event than the person.

The contract had been let in February 1887 to Hobbs and Carter of South Brisbane, with a price of £1,059 and completion time of 8 months. It appears that the memorial was not constructed on the site originally proposed, which necessitated an additional foundation, bringing the final cost to £1,297. The foundation stone was laid on 1 September 1887 by the Mayor of Cooktown, John Savage, and the work had been completed by January 1888. Sandstone used in the construction came from Murphys Creek in southeast Queensland, and it was reputedly the first stone structure erected in Cooktown.

Around the monument, a small (1.5 acres (0.61 ha)) reserve for municipal purposes was gazetted in June 1888. A brick-lined town well, believed to have been built by the Cooktown Municipal Council to service ships berthed at the nearby Cooktown wharves, was constructed in the reserve, south of the monument. This work probably was undertaken post-1888, as the Council filled in much of the Cook Monument Reserve in 1889. A small vertical boiler engine pumped water from the well to the wharves through a 3" diameter pipe. It is understood that the well has also supplied adjacent Charlotte Street businesses from time to time.

In the 20th century, several other memorials were erected within the reserve:

Cook's Monument is situated in a small reserve located between Charlotte Street and the Endeavour River estuary, on a slight rise adjacent to the site where James Cook beached the barque Endeavour for repairs in mid-1770. The reserve is grassed, with palms and mature trees around the perimeter.

The monument comprises a tall, slender sandstone column, topped with a detailed capital, which rises from a square pedestal resting upon a granite base and plinth. The steps of the plinth lead to a square dado incorporating drinking fountains on each side. These fountains were once linked to a regular water supply [possibly an internal tank], and the water outlets emerge from the mouths of sculpted animal heads. The dado is set beneath a modest entablature and the pediment is flanked by sandstone urns at each corner.

To the north of the Cook Monument is the 1803 cannon sent in 1885 to Cooktown by the Queensland colonial government, for the use of the local volunteer defence force. It stands on a concrete platform. Adjacent to the gun is an interpretative sign.

To the south of the Cook Monument, but within the same reserve, are three more recent memorials and the early town well:

Cooks Monument and Reserve was listed on the Queensland Heritage Register on 30 April 1997 having satisfied the following criteria.

Cook's Monument and Reserve is significant historically for its commemoration of Cook's encampment below Grassy Hill, at the mouth of the Endeavour River, in mid-1770 - the first official British sojourn on the east coast of Australia. The place is significant also as Queensland's earliest memorial to James Cook and the crew of the Endeavour, and illustrates Cooktown's early developed sense of historical importance.

The site contains an early brick-lined town well, which is important in illustrating the establishment of municipal services in early Cooktown.

The monument is a fine example of its type and one of the finest sandstone public memorials in Queensland. It is also an excellent example of the work of the Queensland colonial architect's office under George St Paul Connolly.

Its aesthetic setting within a grassy, treed reserve contributes significantly to the townscape of Cooktown, and from the Endeavour River estuary is a Cooktown landmark.

The place has a special association for the people of Cooktown with their sense of historical identity. A number of other memorials have been placed in the reserve, illustrating this continued association.

All content from Kiddle encyclopedia articles (including the article images and facts) can be freely used under Attribution-ShareAlike license, unless stated otherwise. Cite this article:
Cooks Monument and Reserve Facts for Kids. Kiddle Encyclopedia.