Seventeen Seventy, also written as 1770, is a town and locality in Gladstone Region, Queensland, Australia, built on the site of the second landing by James Cook and the crew of HM Bark Endeavour in May 1770 (Cook's first landing in what is now the state of Queensland). Originally known as Round Hill – after the creek it sits on – the name was changed in 1970 to commemorate the bicentenary of Cook's visit. The community of Seventeen Seventy hold the re-enactment of this historic landing each year as part of the 1770 Festival held in May. 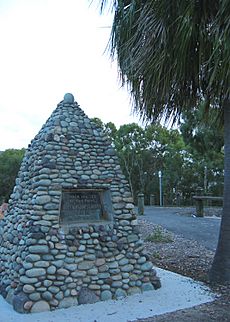 Although the town is referred to locally as "1770", the official name of the town is Seventeen Seventy, as it is principle of Queensland's place naming that numbers are spelled out.

The village is a tourist destination on Queensland's Discovery Coast. It is situated on a peninsula, with the Coral Sea and Bustard Bay on three sides. Agnes Water is eight kilometres (five miles) to the south. The village itself contains holiday accommodation, restaurants, general store, hotel, picnic areas with free barbecues and a small marina where daily trips depart for Lady Musgrave Island on the Great Barrier Reef, and several trips a week to Bustard Head Light Station.

Seventeen Seventy can be reached by a sealed road from Bundaberg, 120 kilometres (75 mi) to the south, going through Agnes Water. The town sustains a small permanent population; a significant holiday population makes it to the area to take advantage of fishing, Great Barrier Reef trips and other water activities.

The area also has four national parks. These are Deepwater, Eurimbula, Mount Colosseum, and Round Hill. These all offer wilderness camping and hiking.

The area's wildlife and vegetation have been preserved as far as possible, and this, together with the area's natural beauty, and an outer surf and inner still water beach, is the main tourist attraction. It also offers day cruises and flights to the outer Great Barrier Reef, to nearby Lady Musgrave Island and Pancake Creek, and the historic Bustard Head lighthouse.

Seventeen Seventy has a number of heritage-listed sites, including:

All content from Kiddle encyclopedia articles (including the article images and facts) can be freely used under Attribution-ShareAlike license, unless stated otherwise. Cite this article:
Seventeen Seventy, Queensland Facts for Kids. Kiddle Encyclopedia.