Agnes Water is a coastal town and a locality in the Gladstone Region, Queensland, Australia. In the 2016 census, Agnes Water had a population of 2,210 people.

Agnes Water is situated approximately 80 kilometres (50 mi) south-east of the Bruce Highway, Queensland's major coastal route. It is accessed via the main road in called Round Hill Road. It is 90 minutes south of Gladstone, and 90 minutes north of Bundaberg on the Discovery Coast. Agnes Water is the closest access point to the southern Great Barrier Reef. It is a neighbouring town of the Town of 1770.

Prior to European settlement Agnes Waters was home to the Meerooni tribe whom form the southern part of the Gurang nation.

The town of Agnes Water takes its name from pastoral holding first leased by Daniel Clowes in 1883, which he named after the coastal schooner Agnes, which was lost at sea in the area. The schooner left Bustard Head on 15 June 1873, on route from Mackay to Brisbane.

Daniel Clowes remained there until his death in 1891. The gravestones of Clowes and his wife are near the present township.

There was saw milling in the locality in the 1890s and the wide beach was a popular venue, particularly as buggies could be driven onto the beach. It became a holiday destination, and weekend residences were built, notably on Round Hill where the Town of 1770 was officially named in 1936. However, the town was regarded as somewhat remote, and it was not until the road into the town was completely sealed in the mid 1990s that development really took off. 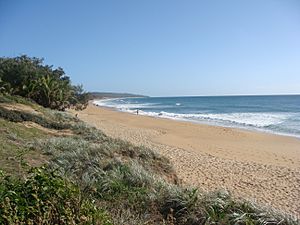 The area of Agnes Water has local churches - the Agnes Water Baptist Church and the Catholic Church are both located on Bicentennial Dve, a short drive from the centre of the area. Census data from 2011 shows that 32.3% of the population do not identify with a religion while 19.6% list Anglican as their religion, followed by Catholicism (16.1%).

The town has a visitor information centre on Round Hill Road. The town also hosts a community centre, coastal camping reserve, life-saving club, state primary school (1990), and a museum which houses the Miriam Vale Historical Society. The Agnes Water Library is at 71 Springs Road; it is operated by the Gladstone Regional Council.

The main beach is 5.5 kilometres (3.4 mi) long, running from Round Hill in the north down to Agnes Water. The beach is relatively straight and faces east-north-east. Most of the beach is backed by a low dune and natural vegetation. At the southern Agnes Water end there is an extensive foreshore reserve, including a camping reserve. The beach usually receives waves averaging about one metre, which combine with the medium sand to build a moderately steep high tide beach, with a continuous bar exposed at low tide. During and following higher swell, up to 30 rip channels are cut across the lower section of the bar and an outer bar forms along the central and northern sections of the beach. The rip channels will persist for some weeks during lower wave conditions. As well as the surf beach, Agnes Water is intersected by rocky headlands and has a stream behind the coastline. A relatively safe beach in the southern patrolled area.

The nearest government secondary school is Rosedale P-12 Campus in Rosedale, 64 kilometres (40 mi) away from the centre of Agnes Water, accessed mostly by local buses that travel the route daily.

Only 7.1% of the population during the 2011 census listed their education level as being over secondary school (i.e. tertiary or further education).

All content from Kiddle encyclopedia articles (including the article images and facts) can be freely used under Attribution-ShareAlike license, unless stated otherwise. Cite this article:
Agnes Water, Queensland Facts for Kids. Kiddle Encyclopedia.