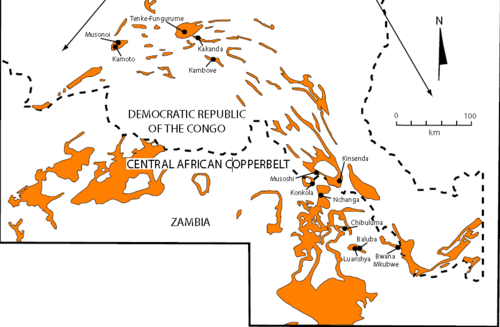 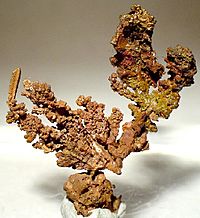 The Copperbelt is a region of Central Africa running through northern Zambia and the southern Democratic Republic of Congo known for copper mining. Traditionally, it refers to the mining regions of Zambia's Copperbelt Province (around the towns of Ndola, Kitwe, Chingola, Luanshya and Mufulira) and the Congo's Katanga Province with its major city at Lubumbashi. In some contexts the term may exclude the Congo entirely. 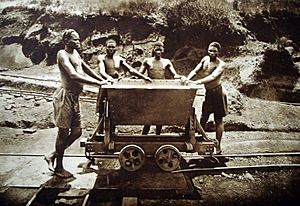 Rwandan migrant workers in a Congolese copper mine, c.1920, during the Belgian colonial period 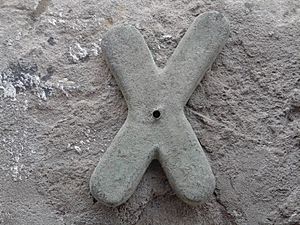 Pre-colonial copper coin from the Katanga Province. Nowadays, these coins are not produced anymore, but the remaining is still used symbolically among traditional families for the payment of dowry along with money and other goods

The Western discovery of copper in Zambia is owed partly to the celebrated American scout Frederick Russell Burnham, who in 1895 led and oversaw the massive Northern Territories (BSA) Exploration Co. expedition which established that major copper deposits existed in Central Africa. Along the Kafue River in then Northern Rhodesia, Burnham saw many similarities to copper deposits he had worked in the United States, and he encountered natives wearing copper bracelets. In his report to the British South Africa Company Burnham had this to say about the region:

About 200 miles north of the Falls on the Incalla river, and twelve miles from the Kafukwe (Ed: now known as the Kafue River) and still on the high plateau is probably one of the greatest copper fields on the continent. The natives have worked this ore for ages, as can be seen by their old dumps, and they work it to-day. The field is very extensive, and reaches away to Katanga... The natives inhabiting this part of the country are skilled workmen, and have traded their handiwork with all comers, even as far afield as the Portuguese of the West Coast and the Arabs of the East. These natives, being miners and workers of copper and iron, and being permanently located in the ground, would give the very element needed in developing these fields.

The increasing use of copper bids fair to make it one of the most valuable products a country can have.... The copper mines of Montana and Arizona have proven of more value than the gold mines, regardless of the fact that the copper had to be hauled two thousand miles by rail to the seaboard, and the coal and coke to smelt it hauled hundreds of miles to the mines. So far as natural difficulties are concerned, this northern field can be fed from the coal deposits of the valley of the Zambezi (Ed: Burnham had previously discovered the massive coal fields at Hwange), and the product shipped to the East Coast at a less expense than the product of Montana and Arizona can be laid on the dock at New York.

Many years later, the British South Africa Company built towns along the river a railroad to transport the copper through Mozambique.

The Copperbelt was inhabited by many prehistoric groups including the Chondwe Group whose pottery resembles that of Luangwa vessels found today in the Kalambo Falls region.

All content from Kiddle encyclopedia articles (including the article images and facts) can be freely used under Attribution-ShareAlike license, unless stated otherwise. Cite this article:
Copperbelt Facts for Kids. Kiddle Encyclopedia.