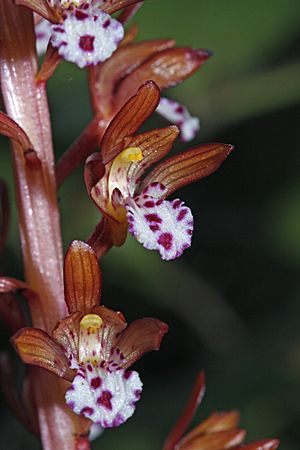 The Corallorhiza maculata side petals are reddish, and the lip petal is bright clean white with deep red spots.

Corallorhiza maculata is a myco-heterotroph; it lacks chlorophyll and obtains energy by parasitizing the mycelium of fungi in the family Russulaceae. The rhizome and lower stem are often knotted into branched coral shapes. The stem is usually red or brown in color, but occasionally comes in a light yellow or cream color. There are no leaves and no photosynthetic green tissues. The stems bear dark red scales and intricate orchid flowers.

Corallorhiza maculata flowers are small and emerge regularly from all sides of the stem. The sepals are dark red or brown tinged with purple, long and pointed. The side petals are reddish, and the lip petal is bright clean white with deep red spots. It is usually scalloped along its edges and 7–10 mm (9⁄32–13⁄32 in). In some varieties, the lip may be plain white without spots. 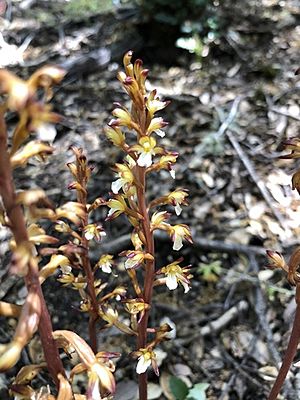 An unspotted form of Corallorhiza maculata that also bears yellow-tinged petals and sepals.

Several Native American groups historically used the orchid's stems dried and brewed as a tea for such maladies as colds, pneumonia, and skin irritation.

Corallorhiza maculata is also the topic of the poem On Going Unnoticed by Robert Frost.

All content from Kiddle encyclopedia articles (including the article images and facts) can be freely used under Attribution-ShareAlike license, unless stated otherwise. Cite this article:
Corallorhiza maculata Facts for Kids. Kiddle Encyclopedia.