Cornelius is a city in Washington County, Oregon, United States. Located in the Portland metropolitan area, the city's population was 11,869 at the 2010 census. The city lies along Tualatin Valley Highway between Forest Grove to the west and Hillsboro to the east. Cornelius was incorporated in 1893 and is named for founder Thomas R. Cornelius.

In 1845, Benjamin Cornelius immigrated to Oregon with his family, traveling with Joseph Meek. The Cornelius family settled on the Tualatin Plains, near what is now North Plains. The same year, Benjamin Q. Tucker and Solomon Emerick staked land claims and established farms on the land that would eventually become Cornelius. At that time, the area was called Free Orchards; there was no actual community, but the name referred to the orchards on the 107 acres (0.43 km2) of land.

In 1871, Benjamin Cornelius's son Colonel Thomas R. Cornelius learned that Ben Holladay planned to extend the Oregon and California Railroad right through Free Orchards. Holladay had been told by Forest Grove and Hillsboro that they would not allow the railroad free right-of-way, so Holladay planned to bypass them, and build Free Orchards into a new city that would become the new county seat of Washington County. 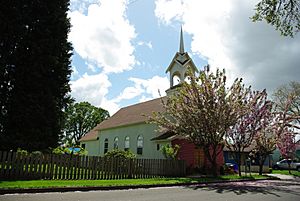 Church in the city on South Beech Street

The new railroad was approaching Free Orchards in 1871, and Cornelius saw an opportunity to benefit from the new railroad. He left his farm and built a new house, a warehouse, and a store in Free Orchards. The warehouse and store were located right next to the railroad, and so became natural places for local farmers to trade and store their goods. Cornelius also built a creamery to process milk, and two sawmills to supply lumber for the growing community. In addition, he helped to build the first frame schoolhouse and the Methodist Church.

In 1893, Free Orchards was incorporated and renamed "Cornelius", to honor the man who spent many years helping build the community. Though Holladay's plan to make Free Orchards into the county seat never materialized, Cornelius survives today as an agricultural town and, increasingly, as a suburb of Portland. The Cornelius Public Library was founded in 1912.

According to the United States Census Bureau, the city has a total area of 2.01 square miles (5.21 km2), all land.

There were 3,339 households of which 51.8% had children under the age of 18 living with them, 62.1% were married couples living together, 10.5% had a female householder with no husband present, 7.3% had a male householder with no wife present, and 20.2% were non-families. 14.1% of all households were made up of individuals and 5.1% had someone living alone who was 65 years of age or older. The average household size was 3.51 and the average family size was 3.88.

There were 2,880 households out of which 45.3% had children under the age of 18 living with them, 61.8% were married couples living together, 10.4% had a female householder with no husband present, and 22.0% were non-families. 15.9% of all households were made up of individuals and 5.4% had someone living alone who was 65 years of age or older. The average household size was 3.31 and the average family size was 3.64.

Cornelius is within the TriMet district, and public transit service is provided by TriMet's bus line 57-TV Highway, which operates seven days a week. Line 57 connects the city with Forest Grove, to the west, and with Hillsboro and Beaverton to the east, via the Tualatin Valley Highway (known by locals as "TV Highway"). It also links Cornelius with the Portland region's light rail system (MAX) in Hillsboro.

All content from Kiddle encyclopedia articles (including the article images and facts) can be freely used under Attribution-ShareAlike license, unless stated otherwise. Cite this article:
Cornelius, Oregon Facts for Kids. Kiddle Encyclopedia.