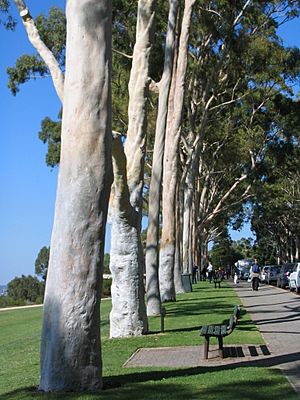 Corymbia citriodora, commonly known as lemon-scented gum or spotted gum, is a species of tall tree that is endemic to north-eastern Australia. It has smooth white to pink bark, narrow lance-shaped to curved adult leaves, flower buds in groups of three, white flowers and urn-shaped or barrel-shaped fruit.

Lemon-scented gum was first formally described in 1848 by William Jackson Hooker in Thomas Mitchell's Journal of an Expedition into the Interior of Tropical Australia. In 1995 Ken Hill and Lawrie Johnson changed the name to Corymbia citriodora. The specific epithet (citriodora) is Latin, meaning "lemon-scented".

Corymbia citriodora is similar to C. maculata and C. henryi.

Corymbia citriodora grows in undulating country in open forest and woodland in several disjunct areas in Queensland and as far south as Coffs Harbour in New South Wales. In Queensland it is found as far north as Lakeland Downs and Cooktown and as far inland as Hughenden and Chinchilla.

Plants of C. citriodora are naturalised in the Darling Range near Mundaring, Western Australia and by planting to suburban New South Wales, South Australia and Victoria. It prefers lighter, slightly acidic loamy soils and occurs in dry sclerophyll forest and woodlands in hilly country.

Kings Park in Perth has a famous, beautiful avenue of this species planted many years ago, but it has spread to become a serious weed.

Corymbia citriodora is an important forest tree, in demand for structural timber and for honey production. It also is popular in horticulture both within Australia and overseas. The name Corymbia citriodora comes from the Latin citriodorus, which means lemon-scented.

Many naturalists and conservationists do not recognise the genus Corymbia and still categorise its species within Eucalyptus. Corymbia is a genus of about 113 species of tree that were classified as Eucalyptus species until the mid-1990s. It includes the bloodwoods, ghost gums and spotted gums. The bloodwoods had been recognised as a distinct group within the large and diverse genus Eucalyptus since 1867. Molecular research in the 1990s, however, showed that they, along with the rest of the Corymbia section, are more closely related to Angophora than to Eucalyptus, and are probably best regarded as a separate genus. All three genera—Angophora, Corymbia and Eucalyptus—are closely related, often difficult to tell apart, and are still commonly and correctly referred to as "eucalypts".

The essential oil of the lemon-scented gum mainly consists of citronellal (80%), produced largely in Brazil and China. Unrefined oil from the lemon eucalyptus tree is used in perfumery, and a refined form of this oil is used in insect repellents, especially against mosquitoes. The refined oil's citronellal content is turned into cis- and trans- isomers of p-menthane-3,8-diol (PMD), a process which occurs naturally as the eucalyptus leaves age. This refined oil, which includes related compounds from the essential corymbia citriodora, is known widely by its registered tradename, "Citrepel" or "Citriodiol", but also by generic names which vary by region: "oil of lemon eucalyptus" or "OLE" (USA); "PMD rich botanic oil" or "PMDRBO" (Europe); "PMD and related oil of lemon eucalyptus compounds" (Canada); Extract of Lemon Eucalyptus (Australia). Pure PMD is synthesized for commercial production from synthetic citronellal. Essential oil refined from the leaves of the tree can contain up to 98% citronella content. The smell of the essential oil can vary, but mostly includes a strong odor comparable alone to citronella oil, with a slight hint of lemon scent.

A study comparing mosquito repellents found that products using the oil of lemon eucalyptus were effective at driving mosquitos away from a human hand.

All content from Kiddle encyclopedia articles (including the article images and facts) can be freely used under Attribution-ShareAlike license, unless stated otherwise. Cite this article:
Corymbia citriodora Facts for Kids. Kiddle Encyclopedia.