Crackpot is a village in Swaledale, North Yorkshire, England.

Its name derives from the Old English kraka (a crow) and the Viking word pot (usually a cavity or deep hole often in the bed of a river, but in Crackpot's case it refers to a rift in the limestone). 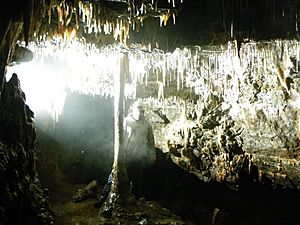 A caver standing beside the column in Crackpot Cave

Crackpot Cave is located south of Crackpot in Scurvey Scar. It contains a fine example of a column - where a stalactite has joined up with its stalagmite. To get to it you have to pass along the aptly named Knee-wrecker Passage.

All content from Kiddle encyclopedia articles (including the article images and facts) can be freely used under Attribution-ShareAlike license, unless stated otherwise. Cite this article:
Crackpot, North Yorkshire Facts for Kids. Kiddle Encyclopedia.