Creedmoor is a city in Granville County, North Carolina, United States. The population was 4,124 at the 2010 census.

Over the next few years, Creedmoor served as a railroad depot between the Clarksville and Oxford Railroad and the Raleigh and Gaston Railroad. In 1886, Thomas B. Lyon applied to the Postal Department for a post office to be located in Creedmoor. Lyon's request was granted on 10 April 1886. John Harmon was appointed as the first postmaster. In September of that same year, Samuel C. Lyon, son of Thomas B. Lyon, was appointed postmaster.

Creedmoor was incorporated in 1905, having previously been known as "Creedmore". The first mayor was Joseph L. Peed (1859–1936). In 1888 Lyon sold part of his land to the Durham and Northern Railroad for track to run through the town. Linking Creedmoor to Henderson and Durham was a major cause of growth of this town. The old Seaboard train depot building still stands at its location on Elm Street, making it over 120 years old.

Also previously located on Elm Street was the original First Baptist Church of Creedmoor, built in 1895. The present church building from 1950 stands on Main Street. Lyon's body is entombed on the grounds of the original cemetery for the church, whereas Robert Fleming's body is entombed in a small family plot on Fleming Street, a road named for the founder, adjacent to Elm Street. In 1917, electricity came to Creedmoor when G. H. Dove and F. J. McDuffy flipped a switch in their plant on Railroad Street.

Although the town is rich with history (home to four buildings on the National Register of Historic Places), it does not hold the title of a Historic District unlike nearby Oxford and Wake Forest.

Tobacco was extremely important in the early history of the town. Four tobacco warehouses were built in the town in the early 1900s. Tobacco was a cash crop in Creedmoor, and was shipped by railroad to nearby Oxford's Tobacco Research Facility and Durham's thriving smoking tobacco industry, with firms including W. T. Blackwell and Company, American Tobacco Company, and Liggett & Myers. At one time Creedmoor was a larger tobacco market than Durham. Area farmers did not limit themselves to tobacco only, but also grew cotton, a profitable crop.

In the wake of the tobacco era, mules came to Creedmoor. About forty train car loads of mules were pulled into the town each year. Mules were the ideal farm animals because their hooves were smaller than those of a horse. Their smaller feet helped them pass through rows of tobacco without stepping on the crop. In 1906, Jim Netherly and a Mr. Cooper founded the Creedmoor Supply Company, which sold feed, mules, horses, buggies, and even some groceries and seeds to meet the demands of local farmers. G.M. Chappell opened a barn that auctioned mules, horses, and cows from 1938 to 1962. At one point in time, Creedmoor was considered to be the largest mule trading center in the world and was widely referred to as "Mule Town". By 1940, over $500,000 were traded and spent on mules each year. It was not until the mid-1950s that the town removed the slogan "One of the Largest Retail Livestock Markets in North Carolina" from the official letterhead. By then, the mule trade was no longer a major part of the local economy. 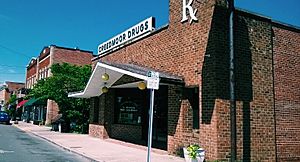 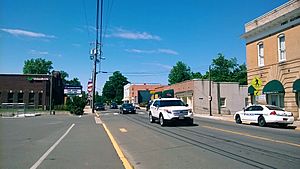 Creedmoor is home to four buildings listed on the National Register of Historic Places:

Lake Rogers, a 175-acre (0.71 km2) lake that offers picnicking, fishing, playground and boating accommodations, is in the northwest part of the city. Creedmoor is within the Neuse River watershed.

All content from Kiddle encyclopedia articles (including the article images and facts) can be freely used under Attribution-ShareAlike license, unless stated otherwise. Cite this article:
Creedmoor, North Carolina Facts for Kids. Kiddle Encyclopedia.