A crisp is a type of American dessert, usually consisting of a type of fruit, baked with a crispy topping, hence the name. The topping usually consists of butter, flour, oats, brown sugar and usually spices such as cinnamon and/or nutmeg. The most familiar type of crisp is apple crisp, where apples are baked with this topping. However, many other kinds of fruit can be used, such as cherries, pears, peaches, blueberries, etc.

The dessert is similar to a crumble. 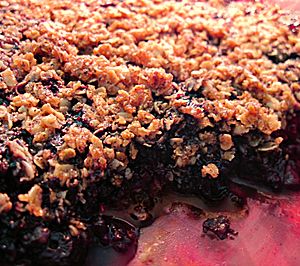 A crisp made with blueberries and raspberries

All content from Kiddle encyclopedia articles (including the article images and facts) can be freely used under Attribution-ShareAlike license, unless stated otherwise. Cite this article:
Crisp (dessert) Facts for Kids. Kiddle Encyclopedia.