Crowheart is a census-designated place (CDP) in Fremont County, Wyoming, United States. The population was 141 at the 2010 census. Nearby Crowheart Butte was the site of a battle between the Crow and Shoshone American Indian tribes in 1866. According to legend, following a five-day battle for rights to the hunting grounds in the Wind River Range, Chief Washakie of the Shoshone and Chief Big Robber of the Crow agreed to a duel, with the winner gaining the rights to the Wind River hunting grounds. Chief Washakie eventually prevailed, but he was so impressed with the courage of his opponent, that rather than scalp him, he instead cut out his heart and placed it on the end of his lance.

There were 62 households, out of which 37.1% had children under the age of 18 living with them, 45.2% were married couples living together, 16.1% had a female householder with no husband present, and 30.6% were non-families. 27.4% of all households were made up of individuals, and 8.1% had someone living alone who was 65 years of age or older. The average household size was 2.63 and the average family size was 3.23. 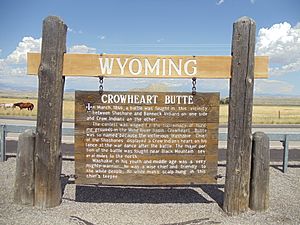 A sign in front of nearby Crowheart Butte explains how the geological feature got its name.

All content from Kiddle encyclopedia articles (including the article images and facts) can be freely used under Attribution-ShareAlike license, unless stated otherwise. Cite this article:
Crowheart, Wyoming Facts for Kids. Kiddle Encyclopedia.