Cuero ( KWAIR-oh) is a city in DeWitt County, Texas, United States. The population was 6,841 at the 2010 census. It is the county seat of DeWitt County. It is unofficially known as the "turkey capital of the world" (this is reflected in the Cuero High School mascot, the Gobblers). In 2010, Cuero was named one of the "Coolest Small Towns in America" by Budget Travel magazine.

The city of Cuero had its start in the mid-19th century as a stopping point on the Chisholm Trail cattle route to Kansas. However, it was not recognized as a town until 1873, when it was officially founded. The city was named for the Spanish word meaning "hide", referring to the leather made from animal hides. The industry was extremely short-lived, however, and gave way to various forms of ranching. The city had several Old West gunfights related to clan feuding following the Civil War

Cuero's population grew considerably in the 1870s and 1880s, as residents from the coastal town of Indianola, Texas, settled here after major hurricanes in this period destroyed sizeable portions of that city. Cuero thrived through much of the late 19th and early 20th centuries by the introduction and practice of turkey ranching in the area. Today, agriculture is still the primary industry in the region. Cuero is considered to be one of the top cattle producers and shippers in Texas.

Cuero is located east of the center of DeWitt County near the mouth of Sandies Creek, where it empties into the Guadalupe River.

The climate in this area is characterized by hot, humid summers and generally mild to cool winters. According to the Köppen Climate Classification system, Cuero has a humid subtropical climate, abbreviated "Cfa" on climate maps. Cuero has an annual average precipitation of 38.0 inches (965.2 mm), all rain, as snow is negligible in the area. 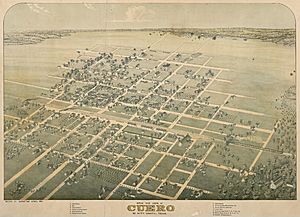 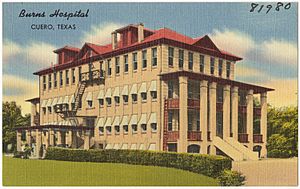 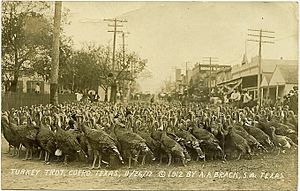 Turkey Fest is a local festival during which the townsfolk compete with people at various turkey-centric events. The competitions revolve around the turkeys each town raises and in which each takes immense pride. The events are the prettiest turkey contest, turkey toss, turkey trot, and turkey race. Unlike most turkey trots, where humans do the racing, in Cuero, the "turkey trot" involves racing actual turkeys.

In 1972, Charles Kuralt did an "On the Road" Report for CBS News from Cuero, where he did his own turkey call.

"Christmas in Cuero" began in 2000 with the lighting of the gazebo in Cuero Municipal Park. It has grown to over 100 displays of Victorian and Western scenes, 12-car trains, gingerbread houses, and other scenes. A live nativity scene is sponsored by a church in Cuero. Two of the scenes were vandalized by two teens in November 2009. The park was still open to the public excluding the two damaged scenes. The teens arrested for the crime had their bonds set at $150,000, in part because of the effect the crime had on the community.

Cuero has many places for recreation, including a baseball complex, a golf course, volleyball courts, tennis courts, a basketball pavilion, and a park area with access to public swimming pool.

All content from Kiddle encyclopedia articles (including the article images and facts) can be freely used under Attribution-ShareAlike license, unless stated otherwise. Cite this article:
Cuero, Texas Facts for Kids. Kiddle Encyclopedia.