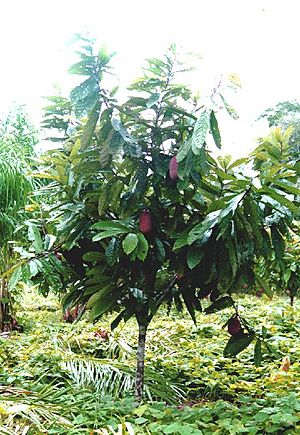 Cupuaçu (Theobroma grandiflorum), also spelled cupuassu, cupuazú, cupu assu, and copoasu, is a tropical rainforest tree related to cacao. Common throughout the Amazon basin, it is widely cultivated in the jungles of Colombia, Bolivia and Peru and in the north of Brazil, with the largest production in Pará, followed by Amazonas, Rondônia and Acre.The pulp of the cupuaçu fruit is widely consumed throughout Central and South America, and is used to make ice creams, snack bars, and other value added products.

The wood is also commonly used for timber.

Flowers of cupuaçu are structurally complex, and require pollination. Pollination can also be negatively effected by environmental conditions. Pollinators, which include chrysomelid weevils and stingless bees, are unable to fly between flowers in heavy rains.

The white pulp of the cupuaçu has an odour described as a mix of chocolate and pineapple and is frequently used in desserts, juices and sweets. The juice tastes primarily like a pear, with a hint of banana.

Cupuaçu is generally harvested from the ground once they have naturally fallen from the tree. It can be difficult to determine peak ripeness because there is no noticeable external color change in the fruit. However studies have shown that in Western Colombian Amazon conditions, fruits generally reach full maturity within 117 days after fruit set.

Cupuaçu is most commonly propagated from seed, but grafting and rooted cuttings are also used.

Cupuaçu trees are often incorporated in agroforestry systems throughout the Amazon due to their high tolerance of infertile soils, which are predominate in the Amazon region. 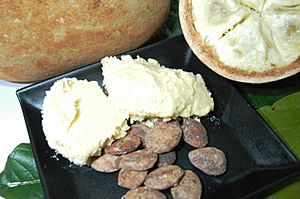 Witches broom (Moniliophthora perniciosa)is the most prominent disease that affects cupuaçu trees. It impacts the entire tree and can result in significant loss of yields, as well as tree death if left untreated. Regular pruning is recommended to reduce the severity of this disease in cupuaçu plantings.

Cupuaçu supports the butterfly herbivore, "lagarta verde", Macrosoma tipulata (Hedylidae), which can be a defoliator.

Cupuaçu butter is a triglyceride composed of saturated and unsaturated fatty acids, giving the butter a low melting point (approximately 30 °C) and texture of a soft solid, lending its use as a confectionery resembling white chocolate.

All content from Kiddle encyclopedia articles (including the article images and facts) can be freely used under Attribution-ShareAlike license, unless stated otherwise. Cite this article:
Cupuaçu Facts for Kids. Kiddle Encyclopedia.