Curra, Queensland is a small town in the Wide Bay–Burnett region of Queensland, Australia. It was once part of Shire of Tiaro but is now within the Gympie Region local government area. It also belongs to the non-functional administrative unit known as the County of March. It is situated on the Bruce Highway, north of Gympie. The North Coast railway line passes through the town.

At the 2006 census, Curra had a population of 1,372. It is zoned rural/residential with working pastoral farms and small acreages. Curra is at the northern end of a stretch of the Bruce Highway which starts in the south near Cooroy and is considered to be one of the most dangerous of Queensland roads. 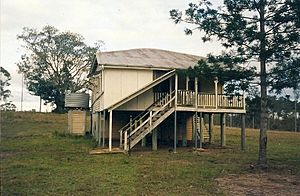 Parts of Curra are beside the Mary River (Aboriginal name 'Monaboola' meaning Wide Bay River, named in 1848 in honour of the wife of Governor Fitzroy who had died in 1847), and the railway to the north. The first landholder owner was Walter Hay whose cattle station homestead in 1859 was named "Currie" and later changed to Curra.

During the gold rush era starting in 1867, Curra was a stopover depot at Palmer's Stockholm Hotel at the Nine Mile for travellers between Maryborough and Gympie using Cobb & Co coaches. Curra School was opened in 1893, established to cater for the increase in population and closed in 1961. Today, there is a school bus which transports the local school children to the Gympie area. There was a mine in the Curra Estate Road area and there is a working limestone quarry. 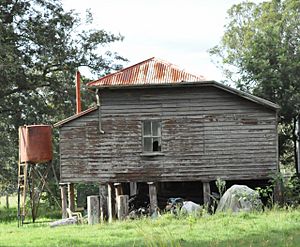 A peaceful area for families and retirees with facilities such as the rural fire service; parks and playground; a post office box; Matilda service station – with motel accommodation, food and groceries and a fruit barn; a community club called the Curra Country Club; and a 6 hectare block of land, council approved for hotel/motel and shops. There is an increasing amount of small businesses establishing in this area.

The Curra Country Club complex started with the purchase from the Department of Works of the Munna Creek Provisional School and over the years the volunteers have played a big part in its formation and improvements along with the local council and with the aid of the grants received. With the population growth, the club has had extensions, installed a modern kitchen, bar, children's playground (named in honour of Mr Cliff Jones when officially opened), netball court, tennis court, cricket soccer, football oval (in the past used as a BMX track) and a car park. One of the local groups, the Curra Art Group, have held festivals for the community's benefit since 2007 and are actively involved with local and Gympie region events. Other members enjoy darts, pool table donated by Mr Edmunds, fishing club and a community bus is available for patrons and other social activities are held.

All content from Kiddle encyclopedia articles (including the article images and facts) can be freely used under Attribution-ShareAlike license, unless stated otherwise. Cite this article:
Curra, Queensland Facts for Kids. Kiddle Encyclopedia.