Kids Encyclopedia Facts
Not to be confused with the Republic of Cyprus.

Cyprus is an area in the Docklands area of the London Borough of Newham. It is located west of Beckton and north of the eastern end of the Royal Albert Dock.

It is named after the Cyprus Estate, a housing estate built for workers at the Royal Albert Dock, which opened in 1881. The estate was named to commemorate the United Kingdom's acquisition of the island of Cyprus in 1878. It was built on one of the few pieces of land not owned by the Port of London Authority, and hence was open to such development. 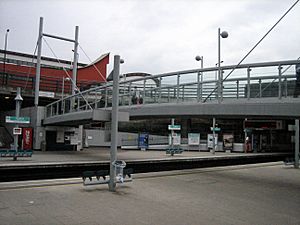 The area is served by a DLR station

The area remains mainly a residential one, with few local commercial services, aside from the presence of the University of East London whose Docklands campus was opened in 1999 and is located on the quayside. There is also a community centre and the Royal Docks Medical Centre.

The nearest Docklands Light Railway station is Cyprus. The station is directly outside the University campus.

All content from Kiddle encyclopedia articles (including the article images and facts) can be freely used under Attribution-ShareAlike license, unless stated otherwise. Cite this article:
Cyprus, London Facts for Kids. Kiddle Encyclopedia.