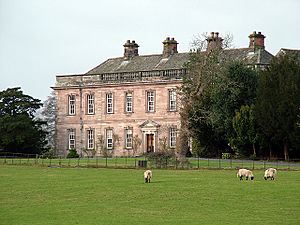 The main facade of Dalemain

Dalemain is a country house around 5 miles south-west of Penrith in Cumbria, England. It is a Grade I listed building.

A peel tower was built on the site during the reign of King Henry II. The old hall dates back to the 12th century, with wings added in the 16th century; the building has remained in the Hasell family since 1679 when it was acquired by Sir Edward Hasell, who had been steward to Lady Anne Clifford. In 1840 Edward and his wife Dorothea had a daughter who grew to be the writer Elizabeth Julia Hasell. The main frontage to the building was added in 1744.

Eva Hasell was born here in 1886. Her parents were Frances Maud (born Flood) and John Edward Hasell JP DL. They owned land and the family's wealth enables her to volunteer for church work. She became a missionary to Canada and a strong supporter of the church and the British Empire.

The house benefits from an extensive garden which received the Garden of the Year Award, sponsored by the Historic Houses Association and Christie's, in 2013. Plants in the garden include a Greek fir which had been a gift from Joseph Banks, the botanist, in the 1840s.

Founded in 2005 the World's Original Marmalade Awards & Festival held in March each year at Dalemain have become an landmark culinary event. Entries are sent in from all over the world including Taiwan, Japan, Australia, and Lebanon. The event has raised nearly £250,000 over the years for local charity Hospice at Home Carlisle and North Lakeland, and for palliative care both in the UK and overseas.

In May 2019, a national sister festival, the Japanese Marmalade Awards and Festival, will take place in Yawatahama, Ehime, a major center of Japan's citrus fruit production.

All content from Kiddle encyclopedia articles (including the article images and facts) can be freely used under Attribution-ShareAlike license, unless stated otherwise. Cite this article:
Dalemain Facts for Kids. Kiddle Encyclopedia.