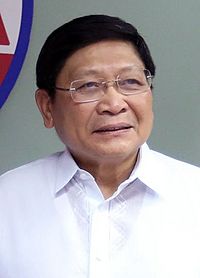 Danilo Delapuz Lim (June 2, 1955 – January 6, 2021) was a Filipino brigadier general. He was Chairman of the Metropolitan Manila Development Authority from 2017 until his death in 2021.

He was in jail at Camp Crame in Quezon City from 2006 to 2010 for rebellion charges and an attempted coup d'état. After more than 4 years in prison, Lim was granted temporary freedom by the Armed Forces of the Philippines on May 31, 2010.

All content from Kiddle encyclopedia articles (including the article images and facts) can be freely used under Attribution-ShareAlike license, unless stated otherwise. Cite this article:
Danilo Lim Facts for Kids. Kiddle Encyclopedia.