David James "Mac" McAllister (born 12 January 1971) is a German politician of the conservative Christian Democratic Union (CDU). On 1 July 2010 he was elected Minister-President of the state of Lower Saxony, succeeding Christian Wulff, who resigned following his election as President of Germany. Until 2013, McAllister headed a coalition government with the liberal FDP, the Cabinet McAllister. In 2013, he was succeeded by Social Democrat Stephan Weil.

A lawyer by profession, he has been the chairman of the CDU parliamentary group in the Landtag of Lower Saxony from 2003 to 2010 and was elected chairman of the state party from 2008 until 2016. From 2010 until 2013, he was also a member of the supervisory board of Volkswagen.

McAllister is of German and Scottish descent, and he leads a state that has historic ties to Britain, as the old Kingdom of Hanover makes up parts of the state and the state capital is Hanover City. 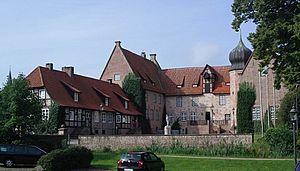 McAllister was born in West Berlin on 12 January 1971 to a Scottish father and a German mother. His father, James Buchanan McAllister, was a British civil servant, originally from Glasgow (where the family still has relatives). He had been stationed in West Berlin since 1969, attached to the Royal Corps of Signals. His mother, Mechthild McAllister, is a music teacher. David McAllister was raised bilingual (speaking English and German) and attended a British primary school in Berlin.

After his parents moved to the small town of Bad Bederkesa in Lower Saxony in 1982, he went to the Lower Saxon Internatsgymnasium (boarding school) in Bederkesa, where he took his Abitur in 1989. From 1989 till 1991, McAllister served as a soldier in the Bundeswehr, in Panzerbataillon 74 in Cuxhaven. From 1991–96 he studied law with a scholarship of the Konrad Adenauer Foundation at the University of Hanover. In 1994, McAllister became local chairman of the Junge Union, the CDU youth organisation, in the Cuxhaven district.

McAllister has said that "my upbringing in West Berlin may have had an impact on my resentment towards communists. I became a member of the CDU when I was 17 – it was a birthday present. My parents said, ‘What do you want for your birthday?’ I said I wanted to become a member of the CDU", explaining that his father was a Conservative, although none of his parents were involved in party politics.

From 1996 till 2010, McAllister was a member of the Cuxhaven district council (Kreistag). He served as mayor of his hometown of Bad Bederkesa from 2001 to 2002. From 2002 to 2003, he also was secretary general of the CDU in Lower Saxony. Since 2003, McAllister has been the leader of the CDU parliamentary party group in the Parliament of Lower Saxony, of which he has been a member since 1998. McAllister succeeded Christian Wulff as party chairman of the CDU in Lower Saxony in June 2008, winning the election by a record margin. In 2016, he was succeeded by Bernd Althusmann. In the United Kingdom, McAllister is a supporter of the Conservative Party. 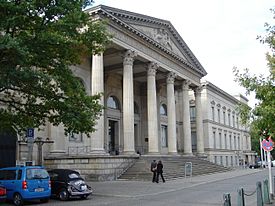 The Parliament of Lower Saxony, in the former residence of the Kings of Hanover

In 2005, Chancellor Angela Merkel offered him the position of Secretary General of the CDU, but McAllister declined, arguing he did not want to rise too far too fast.

He is married to Dunja McAllister, who is also a lawyer. They have two daughters, Jamie Elizabeth and Mia Louise. He lives in Bad Bederkesa in the district of Cuxhaven.

Proud of his Scottish heritage, McAllister proposed to his wife at Loch Ness, and married in August 2003, wearing a kilt. He later explained it was a family tradition.

All content from Kiddle encyclopedia articles (including the article images and facts) can be freely used under Attribution-ShareAlike license, unless stated otherwise. Cite this article:
David McAllister Facts for Kids. Kiddle Encyclopedia.