Davis Islands is a Tampa neighborhood and archipelago on two (formerly three) islands in Hillsborough County, Florida. Its proximity to Downtown Tampa and its views of the Port of Tampa have made it a popular area to live. The area's population was 5,474 at the 2010 census. 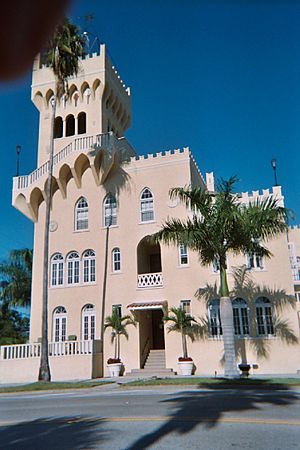 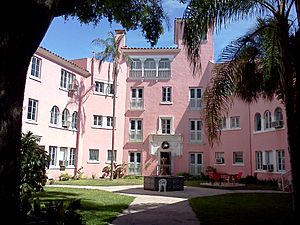 Davis Island is also home to Peter O. Knight Airport and Davis Island Yacht Club. Also on the Islands are the Marjorie Park Municipal Yacht Basin & Marjorie Park at 115 Columbia Drive and the Seaplane Basin just South of the Airport. Marjorie Park was donated to the City of Tampa and named by Davis after his wife Marjorie Merritt Davis.

With a canal fully separating a portion of the island from the rest of it, Davis Islands is technically an archipelago, hence the plural form "Islands" in its name. Originally, Davis Islands consisted of three islands. With the construction of the airport, however, the end of one canal was filled in to make enough land area for a runway, connecting the two largest islands at their southern ends and reducing the archipelago's island count to two.

Nearly all streets on the island are named after bodies of water or islands. They are loosely arranged in alphabetical order starting with Adalia Avenue. (the first street crossed after arriving on the island from the only bridge that connects it to the mainland) and ending with Severn Avenue, the street farthest away from the bridge that leads to the main island's southernmost point, on which the Davis Island Yacht Club is situated. There are no traffic lights on Davis Islands.

Davis Island was built upon two man-made islands atop two small natural islands formerly known as "Little Grassy Key" and "Big Grassy Key" at the mouth of the Hillsborough River. The islands were built from mud dredged from the bottom of Tampa Bay in the 1920s and expanded. This dredge-and-fill operation was undertaken at the height of the Florida Land Boom by developer and Tampa native D. P. Davis. Davis then purchased all the dredged land for $350,000. He planned a resort community with three hotels, nine-hole golf course, airport, and swimming pool. D.P. Davis then sold 306 of the original lots for $1,683,582. The development stalled when the Florida land boom of the early 1920s wound down, and Davis was mysteriously lost at sea while making a transatlantic voyage in October 1926.

Many of the original Mediterranean-style structures are still standing and have received national Historic Designation, as well as local protections. Buildings of note include the Palace of Florence and Mirasol. Today Davis Island is a mix of residential and retail areas. Most predominant today is an eclectic mix of architectural styles because of the slowdown in development in the 1930s.

The Davis Islands Trail linear park was completed in 2010, with amenities such as benches and water fountains. The 10-foot-wide asphalt trail is 1.3 miles and runs from Channel Drive and Davis Boulevard to the parking lot at Peter O. Knight Airport. [1] In 2014, the Roy Jenkins Pool reopened after a $2.5 million renovation. The 85-year-old building at 154 Columbia Drive has two pools, one with five swim lanes extending 75 feet and the other kiddie-sized. [2] Other sports facilities include the Sandra W. Freedman Tennis Complex and an array of softball fields at Davis Islands Park.

There were 2,577 households, out of which 24% had children under the age of 18 living with them, 44% were married couples living together, 7% had a female householder with no husband present, and 8% were non-families. 39% of all households were made up of individuals.

The per capita income for the neighborhood was $48,870. About 3% of the population were below the poverty line.

All content from Kiddle encyclopedia articles (including the article images and facts) can be freely used under Attribution-ShareAlike license, unless stated otherwise. Cite this article:
Davis Islands (Tampa) Facts for Kids. Kiddle Encyclopedia.