Dawan Landry (born December 30, 1982) is an American football player. He plays strong safety for the Jacksonville Jaguars of the National Football League. He played college football for the Georgia Tech Yellow Jackets. He was drafted by the Baltimore Ravens in 2006, and has had a relatively successful career with Baltimore and Jacksonville. Landry missed most of 2008 with an injury, but that was the only season in which he did not play in all 16 games. He had 5 interceptions in 2006 (one toutchdown), four interceptions and a touchdown in 2009, a score in 2010, and two interceptions in 2011. Landry also came in second for the Ravens in 2010 with 111 tackles. 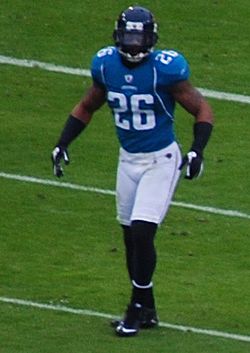 Landry with the Jaguars in 2011

All content from Kiddle encyclopedia articles (including the article images and facts) can be freely used under Attribution-ShareAlike license, unless stated otherwise. Cite this article:
Dawan Landry Facts for Kids. Kiddle Encyclopedia.