Edward Earl Reed Jr. (born September 11, 1978 in St. Rose, Louisiana) is an American football player. He plays as a free safety for the Baltimore Ravens of the National Football League (NFL). Reed was drafted out of the University of Miami by the Baltimore Ravens with the 24th pick in the first round of the 2002 NFL Draft.

Reed grew up in Louisiana.

Reed played for the Miami Hurricanes as a free safety in college. He wore #20. 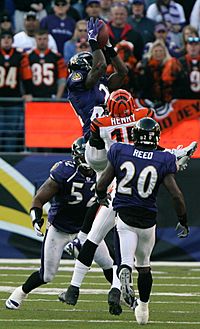 Reed (20) playing for the Ravens against the Cincinnati Bengals.

Reed was drafted by the Baltimore Ravens in 2002. He had seven interceptions in his first season. Reed also developed a talent for blocking punts. In 2004, Reed had what may have been his best career season. He intercepted nine passes, made one sack, had 358 total return yards, and scored twice. This earned Reed the NFL Defensive Player of the Year Award in 2004. One of his touchdowns was a record 106 yards after he intercepted a pass. That was an NFL record until Reed broke his own record in 2008 with a 107 yard interception return for a touchdown. In 2010, Reed intercepted nine passes even though he missed six games because of an injury.

In his career (not counting postseason), Reed managed 547 tackles (455 alone), six sacks, a safety (A sack in the end zone. The team that makes the sack is awarded two points and the opposing drive stops.), 11 forced fumbles, a Ravens record 57 interceptions, and 12 career touchdowns. Reed has become a critical component on a feared Baltimore defense. He is sometimes referred to as the "Robin to the Batman." The "Batman" would be middle linebacker Ray Lewis, who played 16 great seasons on the Ravens. Reed won Super Bowl XLVII with the Ravens when they defeated the San Francisco 49ers 34-31.

Reed started the Eye of the Hurricane Foundation, which helps recovery efforts in Reed's home state of Louisiana after Hurricane Katrina badly damaged the region in 2005.

All content from Kiddle encyclopedia articles (including the article images and facts) can be freely used under Attribution-ShareAlike license, unless stated otherwise. Cite this article:
Ed Reed Facts for Kids. Kiddle Encyclopedia.