Destrehan is a census-designated place (CDP) in St. Charles Parish, Louisiana, United States. At the 2020 census, its population was 11,340.

Destrehan Plantation, his former home, is listed on the National Register of Historic Places. The main house has been restored and is one of the attractions on the Great River Road along the Mississippi River.

Before the Hale Boggs Memorial Bridge was completed connecting the communities of Destrehan and Luling, automobile ferries connected the towns. On October 20, 1976, one of these ferries, the George Prince, was struck by a tanker and capsized as it crossed the Mississippi River. Seventy-eight passengers and crew died. 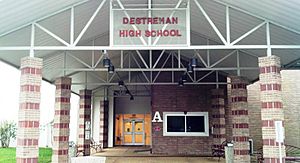 All content from Kiddle encyclopedia articles (including the article images and facts) can be freely used under Attribution-ShareAlike license, unless stated otherwise. Cite this article:
Destrehan, Louisiana Facts for Kids. Kiddle Encyclopedia.