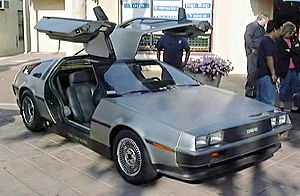 A DMC-12, the car that the De Lorean Motor Company made.

The De Lorean Motor Company was a car manufacturer formed by John DeLorean in 1975. The company only made one car during its existence - the DMC-12, which has featured in the science fiction series Back to the Future as a time machine created by Doc Emmett Brown.

In 1957, John Z. DeLorean decided to create his own sport car. It was one of his childhood dreams. He created the De Lorean Motors Company near Belfast, Northern Ireland, and his project was helped by the British government. His first car, the DMC-12, was produced in 1981. When the car was publicly launched, the car was a success, and 6,539 DMC-12s were produced in 1981. The car was expensive, and regarded as underpowered for its cost.

Production of the DMC-12 continued until 1983, when the De Lorean Motors Company had money problems. John Z. De Lorean was later arrested. Production of De Lorean cars was stopped.

At present, 6000 De Lorean are used regularly by their owners, and a big majority is in the USA.

All content from Kiddle encyclopedia articles (including the article images and facts) can be freely used under Attribution-ShareAlike license, unless stated otherwise. Cite this article:
De Lorean Motor Company Facts for Kids. Kiddle Encyclopedia.