Deeral is a town and coastal locality in the Cairns Region, Queensland, Australia. In the 2016 census, Deeral had a population of 141 people. 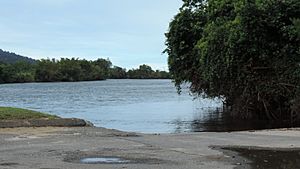 Deeral has an unusual "J"-shape boundaries. The eastern part is a long section of beach facing the Coral Sea and its immediate hinterland; this land is undeveloped and controlled by the Queensland Government. The western part is a curved section of freehold land, cleared and used for farming especially sugarcane. Both of these areas are low-lying (less than 10 metres above sea level). In the very far west of the locality the land begins rises rapidly towards the adjacent Bellenden Ker Range in neighbouring Wooroonooran; this land is undeveloped.

The town was built on Yidinji tribal territory. The town's name was derived from its railway station's name which was named Deeral in 1912, an Aboriginal word in the Yidinyji language meaning teeth.

The Deeral branch of the Queensland Country Women's Association meets at the CWA Hall at 68925 Bruce Highway.

All content from Kiddle encyclopedia articles (including the article images and facts) can be freely used under Attribution-ShareAlike license, unless stated otherwise. Cite this article:
Deeral, Queensland Facts for Kids. Kiddle Encyclopedia.