Yarrabah, traditionally Yagaljida in the Yidin language spoken by the indigenous Yidinji people, is an Aboriginal community situated approximately 53 kilometres (33 mi) by road from Cairns CBD on Cape Grafton. It is much closer by direct-line distance but is separated from Cairns by the Murray Prior Range and the Trinity Inlet, an inlet of the Coral Sea. At the 2006 census, Yarrabah had a population of 2,371. The Yarrabah area was originally inhabited by the Gunggandji people.

An Anglican church missionary, Ernest Gribble ( 1868–1957 ) began to regularly visit an Aboriginal group who inhabited the Yarrabah area living a very traditional lifestyle. These visits by Gribble were to encourage the tribe to move to a mission settlement he was in the process of setting up. With the help of the tribe's leader, Menmuny, the tribe moved to the mission now known as Yarrabah Community. The mission was settled in 1893. Over time, many people (including some South Sea Islanders) were relocated from homelands in the surrounding area to Yarrabah.

In 1957, the Yarrabah residents staged a strike to protest poor working conditions, inadequate food, health problems and harsh administration. The church expelled the ringleaders and many others left voluntarily, never to return. A few years later, the Government of Queensland assumed control of the mission. As a result, still today most of Yarrabah is Crown Land. Native Title claims here are hard to put forward, due to the very fragmented ethnic composition of this community, with many Aborigines in Yarrabah having been settled here from other areas, including interstate.

In 1965, an advisory council was set up which allowed Aboriginals to give "advice" to the Department of Aborigines, but it had no actual power and the government continued to control all aspects of local people's lives. In 1979, several community members joined a union but were stood down.

Eventually, on 27 October 1986, the community received Deed of Grant in Trust land tenure, making it subject to the Community Services (Aborigines) Act 1984, which allowed for self-governing Aboriginal Community Councils with a range of powers and controls over the land. With the passage of reforms in 2005, the Council became an "Aboriginal Shire" and gained the authority of a legal local government.

On 23 July 2007, Yarrabah hosted the Cabinet of the Queensland Government in the first ever Cabinet meeting to be held in an indigenous Australian community. On 1 October 2007, the Howard Coalition Government chose Yarrabah as the first recipient of what was said to be a 'landmark housing and welfare reform agreement'.

The area has a population of approximately 2,600 people as at 2008—the Australian Bureau of Statistics, however, note that official estimates of population may be undercounts due to both language barriers and the transient nature of residence of the outstations.

In the 2006 census, Yarrabah and its outstations recorded a population of 2,371. Of those, 96.9% identified as Aboriginal or Torres Strait Islander. The median age of Yarrabah residents was 21, compared with 34 for the Cairns statistical district. The majority of the Yarrabah workforce was engaged as either labourers or as community and personal service workers, and worked in local government administration or social assistance services. The median individual income was $224 per week compared with $534 per week for the Cairns statistical district. 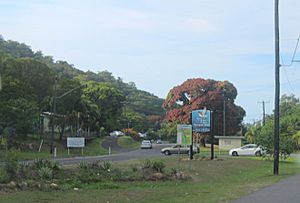 Yarrabah has one small supermarket run by local people, two hot food take-away shops, a local bakery and a drive-in pub, as well as a service station. For most other commercial needs, people need to travel to Gordonvale or Edmonton. The road to the community is bitumen sealed and is accessible all year round despite weather conditions.

Ergon Energy powers the station and the residences. Ergon Energy power lines power the whole community as far as the Oombunji suburb (5-10 kilometres from the Community). Residents who live further than Oombunji & other places/suburbs in Yarrabah such as Wungu, Back Beach, Buddabaddoo, King Beach, Turtle Bay & Jilji have to use power generators for electricity. People who live in these outer places/suburbs can also adapt to live without power. The area is subjected to power blackouts especially during the wet season. During the blackouts there are no cooking facilities. Some blackouts have been known to last up to 5 days.

Yarrabah's medical needs are serviced by a multi-disciplinary primary health care centre, which handles emergencies and general practice care, but does not have inpatient facilities. It is staffed 24 hours a day by nurses who mostly commute from Cairns.

Yarrabah used to be serviced by the Paradise Bus, which is based in Babinda and privately run. As of 2016 this bus service only provides a regular service along the Bruce Highway, about 30 km from Yarrabah, which joins the community of Gordonvale (south of Cairns), with the suburb of Edmonton and the Cairns CBD.

A ferry service used to be in place at Yarrabah, back in the days when there were no sealed roads to reach Cairns. Locals used to call this ferry a 'flatty'. It used to carry school children back and forth from Yarrabah to the city of Cairns.

Projects to build a new wharf at Yarrabah are in place, after the Queensland Government allocated 7 million dollars to this purpose (Cairns Post, 2016). Hopefully, once this new wharf becomes operational, regular and reliable water transport will be resumed for Yarrabah, which lies only 11 kilometres by sea from the Cairns waterfront.

All content from Kiddle encyclopedia articles (including the article images and facts) can be freely used under Attribution-ShareAlike license, unless stated otherwise. Cite this article:
Yarrabah, Queensland Facts for Kids. Kiddle Encyclopedia.