East Trinity is a coastal locality in the Cairns Region, Queensland, Australia. It was formerly known as Trinity East. In the 2016 census East Trinity had a population of 212 people. 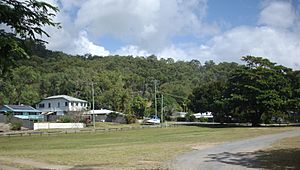 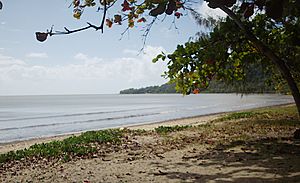 A satellite city urban development and construction of a bridge/tunnel linking Cairns City to East Trinity have been suggested in the past. As well as eco-tourism proposals. Parts of the land, water and environment in and around East Trinity have been subject to acid sulfate soil oxidisation. Acid sulfate soil remediation had been implemented to fix the impacts of soil oxidisation to the land, water and environment in East Trinity.

East Trinity is situated in the Yidinji traditional Aboriginal country.

Prior to 2002, the locality was known as Trinity East.

All content from Kiddle encyclopedia articles (including the article images and facts) can be freely used under Attribution-ShareAlike license, unless stated otherwise. Cite this article:
East Trinity Facts for Kids. Kiddle Encyclopedia.