Delia Julia Akeley (December 5, 1869 – May 22, 1970), commonly known by her nickname, Mickie, was an American explorer. She was born in Beaver Dam, Wisconsin, a daughter of Patrick and Margaret (née Hanberry) Denning, Irish immigrants.

Delia Julia Akeley was born in 1869, although over the years, whether due to Delia's own misrepresentation or that of others, her birth date has been given as 1875. Mickie ran away from home in her late teens and made her way to Milwaukee, where she married Arthur Reiss, a barber, in 1889.

She was just shy of her 20th birthday, but because of the erroneous attribution of her birth date, virtually every published account states that she was 14 when she married Reiss.

In Milwaukee she met taxidermist, artist and inventor Carl E. Akeley, who was employed at the Milwaukee Public Museum. Akeley biographers Penelope Bodry-Sanders and Jay Kirk suggest that Delia and Akeley had an affair; in any case, Delia and Reiss soon divorced, and in 1902 Delia married Akeley, who by then had become Taxidermist-in-Chief at the Field Columbian Museum in Chicago, later the Field Museum of Natural History. 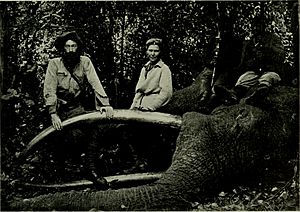 During his years at the Field, she assisted her husband in the creation of his groundbreaking Four Seasons of the Virginia Deer dioramas, and joined him on a 1906-07 collecting expedition to Africa. Akeley later joined the American Museum of Natural History in New York where he continued his taxidermy work and conceived the great Africa Hall. Delia accompanied Akeley on expeditions to collect specimens central to the most important displays in the African sections of both museums. The larger of the mounted African elephants known as the "Fighting Bulls" in the Field Museum's main hall was killed by Delia on the 1906 Field Museum expedition, and she also collected one of the members of the elephant group in the African Hall at the American Museum of Natural History on a 1909-11 expedition for that museum.

In Kenya, when hunting the elephants that were to form the most important of all the displays in the African Hall of the American Museum of Natural History, Carl Akeley was attacked by a bull elephant while out hunting with a team of his porters and helpers. They panicked and ran thinking he was done for. But Akeley survived, in no small part because Delia traveled back to his body with two porters who had initially fled in terror. He was seriously injured, but Delia got him to a hospital after a dangerous portage in mountainous country. She also nursed him back from the brink of death on at least one other occasion when he would have succumbed to blackwater fever2

In 1920, after Carl's recovery from blackwater fever, the Akeleys returned to New York accompanied by a pet monkey called "J.T. Jr.", acquired by the Akeleys during their last expeditions in Kenya. Back in New York, Carl Akeley spent his time raising money for the museum, sculpting models for his dioramas, and becoming better acquainted with Mary Jobe, a former debutante and Bryn Mawr graduate who had become an African explorer and ethnographer. Delia became increasingly occupied with the care and study of J.T. who was an extremely bright and jealous primate.

Both Bodry-Sanders and Kirk suggest that Delia's obsession with the monkey, and increasing isolation from the outside world, contributed to the deterioration of the Akeley marriage, and an acrimonious divorce occurred in 1923. Carl married his second wife, Mary, when he was 60 and she was 46, in 1924. Carl Akeley returned to Africa to hunt and study the mountain gorillas with his new wife Mary. In 1926, Carl contracted what has been described as dysentery but involved aggressive progression and aggressive bleeding from his orifices.

In 1924, after her divorce, Delia continued to travel widely in Africa leading her own expeditions and concentrating more on the ethnography of the more reclusive tribes such as the Forest People pygmies. She was one of the first westerners to explore the desert between Kenya and Ethiopia, and she explored the Tana River in a dugout canoe, entering it from the Indian Ocean. She also lived for several months with the pygmies of the Ituri Forest, Zaire.

Delia Akeley died in 1970. Although her obituary lists her age at the time of death as 95, she was in fact 100 years old.

All content from Kiddle encyclopedia articles (including the article images and facts) can be freely used under Attribution-ShareAlike license, unless stated otherwise. Cite this article:
Delia Akeley Facts for Kids. Kiddle Encyclopedia.