Kids Encyclopedia Facts
This page is about the city. For the adjacent town, see Beaver Dam (town), Wisconsin. 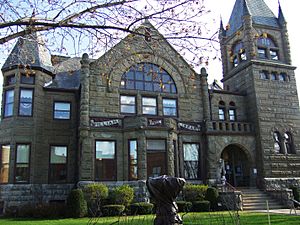 Beaver Dam was first settled by Thomas Mackie and Joseph Goetschius in 1841, and by 1843 had a population of almost 100. The city was named for an old beaver dam located in a stream flowing into Beaver Dam River. The area had also been known as Okwaanim, Chippewa for beaver dam. The community was incorporated as a city on March 18, 1856. That same year the Milwaukee Railroad reached the area, encouraging further growth.

Beaver Dam is also home to the Williams Free Library, the first public library in the United States to have open stacks. 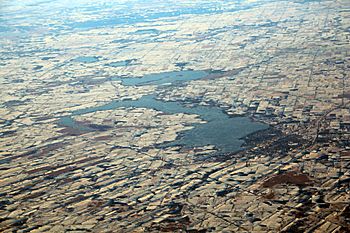 Drumlins near Beaver Dam city and lake, Wisconsin, in one of the largest drumlin fields in the world

The following events are held each year in Beaver Dam, WI:

Beaver Dam High School is the local public high school; its mascot is The Golden Beaver. An alternative school, the Don Smith Learning Academy, is part of the Beaver Dam Unified School District. The city is also home to Wayland Academy, a private school.

The Beaver Dam campus of Moraine Park Technical College is located in the city. 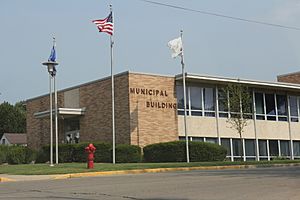 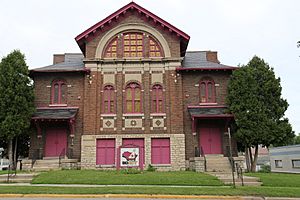 Science, media, and the arts

All content from Kiddle encyclopedia articles (including the article images and facts) can be freely used under Attribution-ShareAlike license, unless stated otherwise. Cite this article:
Beaver Dam, Wisconsin Facts for Kids. Kiddle Encyclopedia.