Dendrobium tetragonum, commonly known as the tree spider orchid, is a variable species of epiphytic or lithophytic orchid endemic to eastern Australia. Tree spider orchids are unusual in having pendulous pseudobulbs that are thin and wiry near the base then expand into a fleshy, four-sided upper section before tapering at the tip. There are only a few thin but leathery leaves at the end of the pseudobulbs and up to five flowers on relatively short flowering stems. To allow for the variations in the species there are five subspecies and a variety, some with a unique common name. 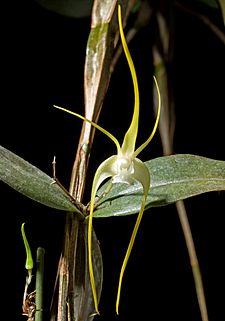 Dendrobium tetragonum was first formally described in 1839 by Allan Cunningham from a specimen "hanging loosely from the stems of small trees in dry shaded woods, Moreton Bay". The description was published in Edwards's Botanical Register edited by John Lindley.

Tree spider orchids are usually epiphytes which grow on trees in rainforest or shady places beside streams, but also sometimes on paperbark trees, especially Melaleuca styphelioides and occasionally on rocks. Different forms of the species occur in different areas of coastal or near-coastal New South Wales and Queensland.

All content from Kiddle encyclopedia articles (including the article images and facts) can be freely used under Attribution-ShareAlike license, unless stated otherwise. Cite this article:
Dendrobium tetragonum Facts for Kids. Kiddle Encyclopedia.