Denver City is a town located partly in Gaines County, but mostly in Yoakum County in the far western portion of the U.S. state of Texas, just a short distance from the New Mexico boundary. It is named for the petroleum company, Denver Productions. The population was 4,479 at the 2010 census. The town is located at the intersection of Texas State Highways 214 and 83.

Oil and ranching remain important to Denver City. The first well was drilled by the wildcatter "Red" Davidson of Fort Worth on the ranch lands of L.P. and Ruth Bennett and her father, Dr. J. R. Smith. Oil gushed to the surface for the first time on October 10, 1935. A part of this Wasson Field, as it is known, is the site of the Yoakum County Park, donated in 1964 by Gene H. Bennett (1921–1998), the youngest son of the Bennetts.

On May 11, 2013, voters in both Denver City and Yoakum County, as well as Crosby County, also in West Texas, all previously under local-option prohibition laws, approved the sale of liquor.

According to the United States Census Bureau, the town has a total area of 2.5 square miles (6.5 km2), all of it land. 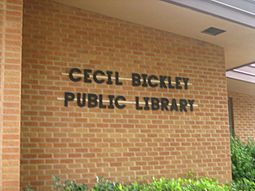 Bickley's Grocery, owned and operated by Cecil Alonzo Bickley, Jr. (1912–2004), and his wife, Peggy Patterson Bickley (1913–2007), was a mainstay of Denver City from 1939 until the couple retired in 1974. Thriftway Foods then became the only supermarket in Denver City.

The Bickleys met in the petroleum boom town of Kilgore in East Texas, but moved to Denver City when it, too, experienced oil discoveries. Bickley was born to Mr. and Mrs. C. A. Bickley, Sr. in the small community of De Leon in Comanche County in West Texas. The senior Bickley was actually named Columbus Alonzo, but used only his initials, C. A. Bickley's grandmother was born on a July 4 and given the unusual first and middle names, Americas Independence. For many years, Bickley was viewed as "Mr. Denver City". The roots of Denver City date only to 1936, as it was the last West Texas boomtown to have been established solely on the basis of oil, still vital to the area economy. He was a founding director of Yoakum County State Bank (now Wells Fargo), the first financial institution in the town. He was a charter member of both the Denver City Lions Club and the Chamber of Commerce. He was a Mason and a Shriner. He served on the Yoakum County Hospital Board. He promoted public schools, particularly athletics, music, and literary programs. Bickley was a founding alderman, having been elected to a single four-year term in 1940. In 1965, he was named the "Outstanding Citizen of Denver City".

Peggy Bickley, a native of Bernice in Union Parish in north Louisiana, at first hated living in dusty West Texas, but in time became an energetic civic booster through the Order of the Eastern Star, the Denver City Museum, the Yoakum County/Cecil Bickley Library (named for her husband), annual American Cancer Society fund drive, the First United Methodist Church, and the Denver City Chamber of Commerce, which named her "Outstanding Citizen of Denver City" in 1984. The Bickleys had two children, Peggy Bickley Point of Austin (born Christmas Day 1941) and William Michael Bickley of Fort Worth (born October 7, 1946). Peggy and Mike Bickley were born in Hobbs, New Mexico, because there was no clinic in Denver City at the time of their births. Cecil and Peggy Bickley were Methodists. They are interred at the Denver City Memorial Cemetery.

The city park has an area of four square blocks. with shade trees and a public swimming pool 12 feet in depth, which opens each year when school is not in session.

All content from Kiddle encyclopedia articles (including the article images and facts) can be freely used under Attribution-ShareAlike license, unless stated otherwise. Cite this article:
Denver City, Texas Facts for Kids. Kiddle Encyclopedia.