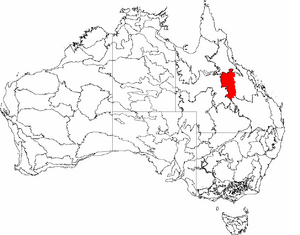 The IBRA regions of Australia, with Desert Uplands in red

The Desert Uplands is an interim Australian bioregion located in north and central western Queensland which straddles the Great Dividing Range between Blackall and Pentland.

The bioregion contains Lake Galilee, Lake Dunn and Lake Buchanan. The climate is semi-arid with highly variable rainfall. Much of the area is used for cattle grazing and is part of the Great Artesian Basin, lying within both the Galilee and Eromanga Basins. The Brigalow Belt North and Brigalow Belt South are to the east of the bioregion, and the Einasleigh Uplands are located to the north.

The two main settlements in the area are at Barcaldine and Aramac.

Spinifex grass is common. More than 80 weeds have been identified in the bioregion.

In 2003, it was estimated that 13 million trees per year were being destroyed in the Desert Uplands. This placed the percentage of land cleared at 6.8%, the third highest for any Queensland bioregion.

The main rivers in the bioregion are Belyando, Cape, Campaspe, Barcoo and Alice River and Aramac and Torrens Creeks. Wetlands at shallow salt lakes Lake Galilee and Lake Buchanan are listed on the Directory of Important Wetlands in Australia.

All content from Kiddle encyclopedia articles (including the article images and facts) can be freely used under Attribution-ShareAlike license, unless stated otherwise. Cite this article:
Desert Uplands Facts for Kids. Kiddle Encyclopedia.