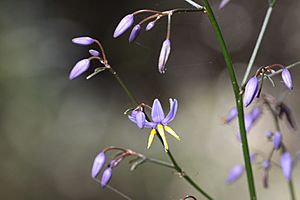 Inflorescence, near the Lane Cove River 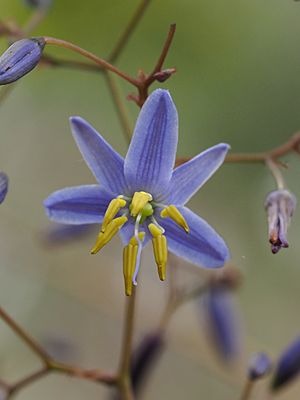 Dianella longifolia, commonly known as blueberry lily, pale flax lily or smooth flax lily, or blue flax-lily, (although other species, or the whole genus Dianella are also referred to by this last name) is a species of flowering plant in the family Asphodelaceae and is endemic to non-arid areas of Australia. It is a tufted, rhizomatous, perennial herb with grass-like leaves, pale blue, white or greenish flowers that have pale yellow anthers, and shiny, pale blue berries.

Six varieties of D. longifolia have been described and accepted by the Australian Plant Census:

Blueberry lily is widespread and common in non-arid parts of Australia, including the Kimberley region, eastern and southern Australia and northern Tasmania.

All content from Kiddle encyclopedia articles (including the article images and facts) can be freely used under Attribution-ShareAlike license, unless stated otherwise. Cite this article:
Dianella longifolia Facts for Kids. Kiddle Encyclopedia.