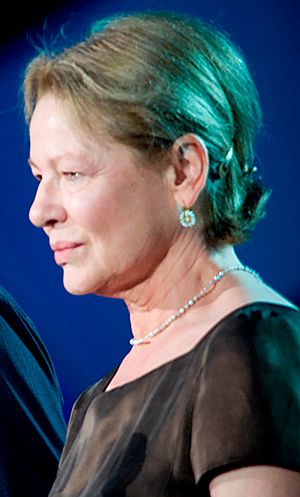 Dianne Wiest (b. March 28, 1948) is an American actress. Her movies include Edward Scissorhands in 1990. She has won two Emmy Awards and two Academy Awards. She was also in other movies, including Footloose. Wiest was born in Kansas City, Missouri.

She also made a suprise appearance on an american tv-show called Brooklyn Nine-Nine. She later went on to make multiple episodes of her own failing tv-show called "Get rid of that Wiest Infection". She was also the star in multiple weetabix commercials, dubbing them Wiestabix.

All content from Kiddle encyclopedia articles (including the article images and facts) can be freely used under Attribution-ShareAlike license, unless stated otherwise. Cite this article:
Dianne Wiest Facts for Kids. Kiddle Encyclopedia.