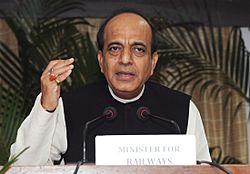 Dinesh Trivedi (born 4 June 1950) is an Indian politician. He is current Member of Parliament in Rajya Sabha from West Bengal since 2020. He is a former Member of parliament, Lok Sabha (2009 to 2019) representing Barrackpore constituency of West Bengal. He was Member of parliament, Rajya Sabha for two separate terms (1990-1996, 2002 to 2008). He is the ex-Union Minister for Railways and the ex-Union Minister of State for Health and Family Welfare under Manmohan Singh's cabinet. Trivedi was awarded of Outstanding Parliamentarian Award for 2016-2017 period and was given at an event at the central hall of Indian Parliament. He is also the Chairman of the Indo-European Union Parliamentary Forum (IEUPF), and other Parliamentary Forums.

All content from Kiddle encyclopedia articles (including the article images and facts) can be freely used under Attribution-ShareAlike license, unless stated otherwise. Cite this article:
Dinesh Trivedi Facts for Kids. Kiddle Encyclopedia.