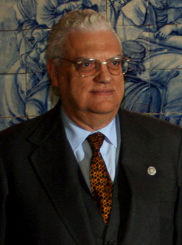 Frietas do Amaral was a candidate for president in 1986 and lost to Mário Soares by a small percentage. He was President of the United Nations General Assembly from 1995 through 1996.

In September 2019, Frietas do Amaral was hospitalized in critical condition for bone cancer at a Cascais hospital. He died at the hospital on 3 October 2019 at the age of 78.

All content from Kiddle encyclopedia articles (including the article images and facts) can be freely used under Attribution-ShareAlike license, unless stated otherwise. Cite this article:
Diogo Freitas do Amaral Facts for Kids. Kiddle Encyclopedia.