The District of Columbia Voting Rights Amendment was a proposed amendment to the United States Constitution that would have given the District of Columbia full representation in the United States Congress, full representation in the Electoral college system, and full participation in the process by which the Constitution is amended. It was proposed by Congress on August 22, 1978. It was ratified by only 16 states by the time of its expiration on August 22, 1985. It was 22 ratifications short of the needed 38 in order for the proposed amendment to have been adopted.

Section 1
For purposes of representation in the Congress, election of the President and Vice President, and article V of this Constitution, the District constituting the seat of government of the United States shall be treated as though it were a State.

Section 2
The exercise of the rights and powers conferred under this article shall be by the people of the District constituting the seat of government, and as shall be provided by the Congress.

Section 3
The twenty-third article of amendment to the Constitution of the United States is hereby repealed.

Section 4
This article shall be inoperative, unless it shall have been ratified as an amendment to the Constitution by the legislatures of three-fourths of the several States within seven years from the date of its submission.

Representative Don Edwards of California proposed House Joint Resolution 554 in the 95th Congress. The United States House of Representatives passed it on March 2, 1978, by a 289–127 vote, with 18 not voting. The United States Senate passed it on August 22, 1978, by a 67–32 vote, with 1 not voting. With that, the District of Columbia Voting Rights Amendment was submitted to the state legislatures for ratification. The Congress included in the text of the proposed amendment that included the requirement that ratification by three-fourths (38) of the states be completed within seven years following its passage by the Congress (i.e., August 22, 1985) in order for the proposed amendment to become part of the Constitution. By placing the ratification deadline in the text of the proposed amendment, the deadline could not be extended, as had been done regarding the Equal Rights Amendment. 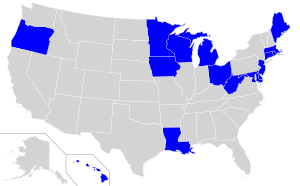 Ratification by the legislatures of at least 38 of the 50 states by August 22, 1985 was necessary for the District of Columbia Voting Rights Amendment to become a part of the Constitution. During the seven-year period specified by Congress it was ratified by only 16 states and so failed to be adopted. The amendment was ratified by the following states:

Effects if it had been adopted

All content from Kiddle encyclopedia articles (including the article images and facts) can be freely used under Attribution-ShareAlike license, unless stated otherwise. Cite this article:
District of Columbia Voting Rights Amendment Facts for Kids. Kiddle Encyclopedia.