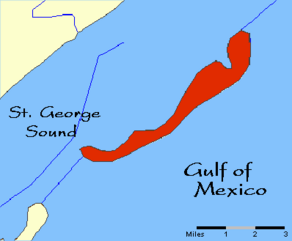 Dog Island Airport (FAA LID: FA43) is an untowered, private use airport located by the Eastern bay of Dog Island. The airport opened in 1930.

The island and its two neighbors were discovered by the French in 1536 and named the Dog Islands, because 1) wild dogs were found on them; 2) the islands resemble a crouched dog, or 3) the early ships put their common sailors - known as dogs - on the islands before docking on the mainland so they could not jump ship. Later, the two neighbors were renamed: St. Vincent, which is a Federal wildlife refuge, and St. George, which has a causeway and an airport (FA43), has developed into a seaside vacation community with shops and beach rentals.

After World War II, Jeff Lewis, a Florida businessman, saw its potential as a vacation area and paid $12,000 for the island. Indians used Dog Island as a fishing camp, and the 1985 hurricanes uncovered pot shards found on the west end.

Dog Island has some evidence of human presence dating back as early as 80,000 years ago. The island also has a rich maritime history. The discovery of a 9th-century canoe is a testament to prehistoric mariners on the island. During the 17th century and 18th century the barrier islands became a haven of piracy and smuggling.

On February 16, 1766, Le Tigre, a French merchant brigantine, was en route to New Orleans and wrecked 300 yards east of Dog Island in a great storm. A survivor, Monsieur Pierre Viaud, chronicled the experience in the best-selling narrative The Shipwreck and Adventures of Monsieur Pierre Viaud published 1769(and translated to English in 1771).

In 1799, the Royal Navy purchased the HMS Fox, a 14 gun British war schooner only to see it wreck later that year between Dog and St. George Islands.

As part of the United States, economic shipping greatly increased as St. Marks, St. Joseph, and Apalachicola became major ports on the Gulf Coast. Both sail and steam ships traveled to Dog Island to exploit its resources of lumber and naval stores, such as turpentine and pitch products. In 1838, Dog Island Light was built on the western tip of the island.

During the Civil War, Dog Island was used by the Union Navy as a base for staging the blockade of Apalachicola.

In 1899, the 2nd hurricane of the season struck the area almost destroying the town of Carrabelle leaving just nine homes. Roughly 6 miles inland at McIntyre, only two mill boilers were left. The summer resort of Lanark Inn was said to be "blown into the Gulf". The Carrabelle, Tallahassee and Georgia Railroad was destroyed for a distance of 30 miles, and a locomotive was displaced some 100 yards off the track.

Fifteen ships were completely destroyed with 12 loaded with lumber. They were: 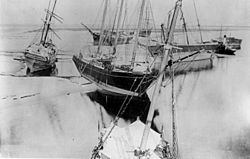 Another 40 ships under 20 tons were sunk or destroyed.

During World War II, Dog Island was part of Camp Gordon Johnston. Four separate camps comprised the complex: three for regimental combat teams, and the fourth for the headquarters and support facilities. Dog Island was used for amphibious landings and airdrops.

An archaeological research project, the Dog Island Shipwreck Survey, was initiated in 1999 by Florida State University researcher Chuck Meide to systematically search the waters off Dog Island, using acoustic and electromagnetic devices, to discover historic shipwrecks. Project archaeologists conducted excavations on the wreck of the 1899 Norwegian lumber ship Vale mentioned above, and also located a number of other submerged archaeological sites, including the ruins of the Dog Island Lighthouse, using sonar and magnetometer.

All content from Kiddle encyclopedia articles (including the article images and facts) can be freely used under Attribution-ShareAlike license, unless stated otherwise. Cite this article:
Dog Island (Florida) Facts for Kids. Kiddle Encyclopedia.