Donalsonville is a city in Seminole County, Georgia, United States. The population was 2,796 at the 2000 census. The city is the county seat of Seminole County.

Donalsonville was originally part of Decatur County. It is named after John Ernest Donalson (1846–1920), also known as Jonathan or John E. Donalson, a prominent businessman of the area. Donalson built the first lumber mill in Donalsonville, Donalson Lumber Company. He also built homes and a commissary for the workers of the mill. The lumber company paved the way for the town's growth.

The Seminole County Courthouse was erected in 1922 and is still standing today. The Courthouse is listed on the National Register of Historic Places. (Wolfe)

There were 1,008 households of which 32.0% had children under the age of 18 living with them, 37.6% were married couples living together, 27.8% had a female householder with no husband present, and 30.8% were non-families. 28.2% of all households were made up of individuals and 14.3% had someone living alone who was 65 years of age or older. The average household size was 2.62 and the average family size was 3.23.

According to 2012 data from the Donalsonville Chamber of Commerce, the top five employers in the city are as follows: 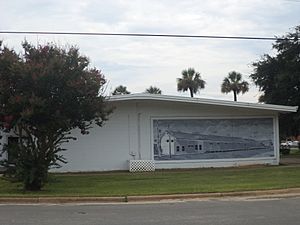 Agriculture, art and music reflect the tone of the city. The Olive Theatre is in an old building downtown which has been renovated and periodically hosts local talent in addition to several plays, concerts, talent contests and other artistic events. Hand-painted murals are present on a few of the downtown buildings and depict the main industry in the county, agriculture.

The former "Harvest Festival", now "Georgia's Big Fish Festival", is a part of Donalsonville’s culture as well. This festival is held each October to educate visitors, support and promote the many sporting and recreational opportunities available at nearby Lake Seminole.

There are many other attractions that are held in and around the City as well including the Christmas Tour of Homes, the PRCA Rodeo, mug track racing, occasional street dances, outdoor concerts, movie nights, indoor concerts, karaoke, parades, book signings, and more.

By the 1900s, the need for churches arose. The first church was erected in Donalsonville in 1850, the Friendship United Methodist Church. In the beginning the Methodist Church served as a meeting place for all Protestant denominations. Later, the First Presbyterian Church of Donalsonville was established in January 1898 with 25 members. On August 4, 1902, 18 people helped to create the First Baptist Church of Donalsonville. The Church of The Nazarene, originally called “The Holiness Church,” was established in October 1902. The meetings of the Church of the Nazarene were actually held in a member’s house until 1903, when a building was erected. The first black church in Donalsonville was created in 1895, the Live Oak African Methodist Episcopal Church. The people of Donalsonville saw the need to create churches to worship and with this vision came a number of churches, eventually totaling thirteen. (City-Data.com)

All content from Kiddle encyclopedia articles (including the article images and facts) can be freely used under Attribution-ShareAlike license, unless stated otherwise. Cite this article:
Donalsonville, Georgia Facts for Kids. Kiddle Encyclopedia.