Seeking a bigger arena after his career start in Europe, Petrović joined the NBA in 1989, as a member of the Portland Trail Blazers. After playing mostly off the bench that year, Petrović experienced a breakthrough following a trade to the New Jersey Nets. While starting for the Nets, he became one of the league's best shooting guards. Petrović's career and life were cut short after he died in a car accident at the age of 28. He received the Olympic Order in 1993.

Petrović is considered the crucial part of the vanguard to the present-day mass influx of European players into the NBA. Petrović's #3 was retired by the Nets in 1993, and in 2002, he was posthumously enshrined in the Naismith Memorial Basketball Hall of Fame. In 2013, he was voted the best European Basketball player in history by players at the 2013 FIBA EuroBasket. 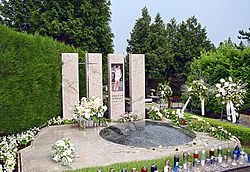 The grave of Dražen Petrović at Mirogoj in Zagreb.

Petrović died in a traffic accident at approximately 17:20 on Monday, 7 June 1993, four and a half months before his 29th birthday. On the rain-drenched Autobahn 9, he was a passenger in a car that was cut off by a semi truck at Denkendorf, near Ingolstadt, in the German state of Bavaria. According to the report of the Ingolstadt police, that afternoon a truck broke through the Autobahn median; the truck driver was trying to avoid a collision with a personal vehicle in his own lane and lost control of the truck, crashing through the median barrier and finally coming to a stop blocking all three lanes of traffic in the opposite direction (Munich). Seconds later, the VW Golf carrying a sleeping Petrović in the passenger seat crashed into the truck, killing him and leaving the driver, Klara Szalantzy, a Hungarian model and basketball player with whom Petrović was romantically involved, and Hilal Edebal, a female Turkish basketball player, with grave injuries. It was established that visibility on the road was very poor and that Petrović was not buckled with a seatbelt.

All content from Kiddle encyclopedia articles (including the article images and facts) can be freely used under Attribution-ShareAlike license, unless stated otherwise. Cite this article:
Dražen Petrović Facts for Kids. Kiddle Encyclopedia.