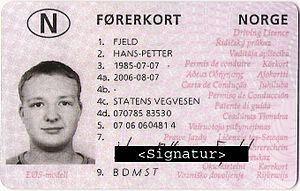 A driver's licence from Norway

In Victoria, Australia (for example), to get a driving licence a person must:

There are fees to be paid to do the driving tests, and if successful, there are more fees to be paid for the licence. Many people get a Learner's permit before getting a license. The first licence may be a Probationary Licence, which has certain restrictions on what a driver can do. After four years, the driver will qualify for a full, unrestricted licence. 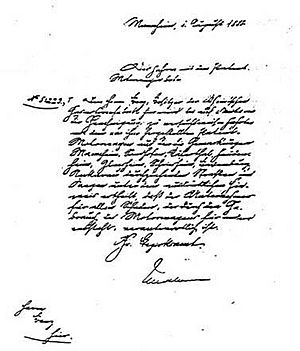 The world's first license to drive a motor vehicle, issued to Karl Benz upon his request.

Karl Benz, inventor of the modern automobile, had to receive written permission from the Grand Ducal authorities to operate his car on public roads in 1888 after residents complained about the noise and smell of his Motorwagen. Up until the start of the 20th century, European authorities issued licenses to drive motor vehicles similarly ad hoc, if at all.

Mandatory licensing for drivers came into force on 1 January 1904 after the Motor Car Act 1903 received royal assent in the United Kingdom. Every car owner had to register their vehicle with their local government authority and be able to prove registration of their vehicle on request. The minimum qualifying age was set at 17. The licence gave its holder 'freedom of the road' with a maximum 20 mph (32 km/h) speed limit. Compulsory testing was introduced in 1934, with the passing of the Road Traffic Act.

Prussia, then a state within the German Empire, introduced compulsory licensing on September 29, 1903. A test on mechanical aptitude had to be passed and the Dampfkesselüberwachungsverein ("steam boiler supervision association") was charged with conducting these tests. In 1910, the German imperial government mandated the licensing of drivers on a national scale, establishing a system of tests and driver's education requirements that was adopted in other countries.

In 1909, the Convention with Respect to the International Circulation of Motor Vehicles recognize the need of qualifications, examination, and authorization for international driving.

In 1929, the notion of International Driving Permit is addressed by international Convention .

In 1977, the Convention on road traffic address the notion of driving license for a number of countries, under the wording driving permit.

Other countries in Europe also introduced driving tests during the twentieth century, the last of them being Belgium where, until 1977, it was possible to purchase and hold a license without having to undergo a driving test.

As automobile-related fatalities soared in North America, public outcry provoked legislators to begin studying the French and German statutes as models. On August 1, 1910, North America's first licensing law for motor vehicles went into effect in the US state of New York, though it initially applied only to professional chauffeurs. In July 1913, the state of New Jersey became the first to require all drivers to pass a mandatory examination before receiving a license.

Many countries, including Australia, New Zealand, Canada, the United Kingdom, and the United States, have no national identification cards. As many people have driver's licenses, they are often accepted as de facto proof of identity. Most identity cards and driver's licenses are credit card size—the "ID-1" size and shape defined in ISO/IEC 7810.

All content from Kiddle encyclopedia articles (including the article images and facts) can be freely used under Attribution-ShareAlike license, unless stated otherwise. Cite this article:
Driver's license Facts for Kids. Kiddle Encyclopedia.