Duck Hill is a town in Montgomery County, Mississippi, United States. The population was 619 at the 2020 census.

Duck Hill is located on U.S. Route 51, midway between Grenada and Winona. Big Bogue Creek flows east of the town. 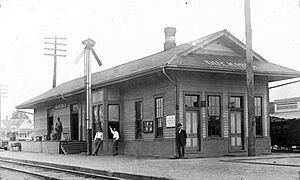 Duck Hill is named for a large hill northeast of the town, where "Duck", a Choctaw chief, held war councils. Chief Duck was also a medicine man or shaman who treated his people. A statue of Chief Duck is located on U.S. Route 51 in Duck Hill, next to an old Illinois Central caboose.

The first European-American settler in the area was John A. Binford in 1834. He built the first home in the area, and developed his property as a cotton plantation. He became one of the region's most successful planters and large slaveholders. Binford was elected to the Mississippi Legislature. Duck Hill was a trading center for the cotton planters.

During the Civil War, Binford's sons, James R. and John A. Jr., helped lead the Confederate "Company E" from Duck Hill, known as the "McClung Rifles". James R. Binford later was elected to the Mississippi State Senate, where after the Reconstruction era, he wrote the Jim Crow laws for Mississippi.

In 1856 the Illinois Central Railroad completed a line from Chicago to New Orleans, and it built a depot at Duck Hill. This stimulated its businesses. Premier passenger trains such as the City of New Orleans and the Panama Limited once passed through the town. The line is now used for freight operation by the Grenada Railway.

A train wreck occurred at Duck Hill on October 19, 1862, when in the early morning hours two trains collided head-on, killing 34 men. Most of the dead where Confederate soldiers. It was the South's worse loss of life in a train accident to that time.

In 1887, regional businessmen hoped that Duck Hill would become a thriving mill town after iron ore was found nearby. Financial speculation followed. Tour of our Southern Correspondent reported in the New York Times:

Duck Hill is the euphonious appellation of a straggling wee bit of a hamlet down in the depths of Mississippi, a dozen miles or so from Grenada, on the Illinois Central Railroad, known to the world and to history in something less than a wholesale way.

Duck Hill was the site of a railroad robbery in 1888. Two armed men, Rube Burrow and Joe Jackson, clung to the outside of a train as it left the station, then climbed to the engine cab where they ordered the engineer to stop the train about a mile north of town. The robbers plundered the express car's safe of $3000, killing one man who tried to help.

In 1930, the Lloyd T. Binford High School opened in Duck Hill. (It was named for Lloyd T. Binford, son of state senator James R. Binford, who had become a Memphis insurance executive and film censor. He was noted for his views on "Southern womanhood" and white supremacy.) The city also built an agriculture education facility for its vocational students. A new elementary school was constructed in 1963. The schools have since closed because of declining population. The high school's gymnasium is used as a community center. In 2012, a committee of volunteers was established to preserve the high school, which has suffered from vandalism.

During World War II, African Americans were among soldiers trained and stationed in the South. In 1943, fifteen armed black soldiers from nearby Camp McCain came to Duck Hill during the night and began firing into the town. There were no injuries. The soldiers were upset about a recent white assault against a group of black soldiers at Starkville, Mississippi.

Senator Trent Lott, whose father sharecropped a stretch of cotton field in Duck Hill during the 1940s, said in 1999 while supporting a bill for public education: "I am a product of public education from the first grade through the second, third, and fourth grades where I went to school at Duck Hill, Mississippi, and I had better teachers in the second, third, and fourth grades in Duck Hill, Mississippi, than I had the rest of my life.

According to the United States Census Bureau, the town has a total area of 1.0 square mile (2.6 km2), all land.

There are several small businesses within the town limits. Of those include a small Jiffy Mart gas station where U.S. Route 51 and Main Street intersect and a Regions Bank. In September 2009, a Dollar General was opened adjacent to U.S. Route 51 in the north part of town.

At one time Duck Hill had its own elementary school, Duck Hill Elementary School; circa 2001 it had around 100 students. At that time school district officials were considering closing it and moving the students to Kilmichael Elementary. The district also, at one time, operated Duck Hill High School.

All content from Kiddle encyclopedia articles (including the article images and facts) can be freely used under Attribution-ShareAlike license, unless stated otherwise. Cite this article:
Duck Hill, Mississippi Facts for Kids. Kiddle Encyclopedia.