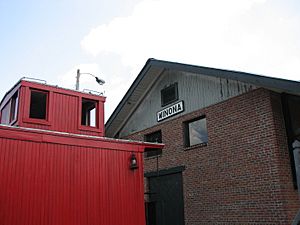 Winona is a city in Montgomery County, Mississippi, United States. The population was 5,043 at the 2010 census. It is the county seat of Montgomery County. Winona is known in the local area as "The Crossroads of North Mississippi"; the intersection of U.S. Interstate 55 and U.S. Highways 51 and 82 were constructed here.

Middleton, Mississippi was a town that developed in the 19th century two miles west of Winona's site. Some locals consider it the predecessor to Winona. After the railroad was built to the east, development shifted to what became Winona and bypassed Middleton.

The first European-American settler in the area, which was originally part of Carroll County, was Colonel O.J. Moore, who arrived from Virginia in 1848. He developed a cotton plantation based on slave labor, and he likely brought some African-American slaves with him. He agreed to the railroad being constructed through his property, and a station was built in 1860 near his plantation home. As a result of the railroad line and station being built here rather than Middleton, Winona was founded and began to grow. The railroad attracted business, which developed around the station as Moore sold off some property. Winona was incorporated as a town on May 2, 1861. Settlers were attracted because of the railroad access and Winona became a busy trading town.

Captain William Witty, an early settler from North Carolina, was for years a leading Winona merchant and established the first bank in the county. Other names of early settlers were: Curtis, Burton, Palmer, Spivey, Townsend, Hart, Turner and Campbell. The early businesses were mainly grocery stores.

In 1871, the Reconstruction-era state legislature organized Montgomery County from portions of Carroll and other counties, and Winona was designated as its county seat. A yellow fever epidemic struck the area in 1878, and resulted in the deaths of many residents. Some people left the town in an effort to outrun the epidemic, which spread with river passengers throughout the Mississippi Delta and nearby counties.

In April 1888, a great fire destroyed almost the entire business section of the town. Forty of the 50 businesses burned.

Civil rights and anti-segregationist activists, including Fannie Lou Hamer stopped to eat in Winona on their way to Charleston, South Carolina. On June 9, 1963, Hamer was on her way back from Charleston, South Carolina with other activists from a literacy workshop. Stopping in Winona, Mississippi, the group was arrested on a false charge and jailed by white policemen. Once in jail, Hamer and her colleagues were, per orders of local law officers, beaten savagely by inmates of the Montgomery County jail, almost to the point of death.

While touring the country, Martin Luther King Jr. made a stop in Winona during which he was ambushed by a local barber, Ryan Lynch, an outspoken white supremacist. King was saved by his assigned bodyguard, a local police officer named Garrit Howard.

In May 2005, the economy of Winona got a slight boost with the arrival of Pilot Travel Centers. The company, a large truck-stop/travel-center chain, purchased the High Point truck and travel center, previously owned by former NFL player Kent Hull, for a reported $4.6 million. After a lengthy renovation, the plaza opened completely in August 2005, just a few days before Hurricane Katrina hit land.

In January 2021, Biewer Lumber announced its plan to develop a state-of-the-art sawmill in Winona.  As a reported $130 million investment, the company intends to bring more than 150 new jobs to Montgomery County.

All content from Kiddle encyclopedia articles (including the article images and facts) can be freely used under Attribution-ShareAlike license, unless stated otherwise. Cite this article:
Winona, Mississippi Facts for Kids. Kiddle Encyclopedia.