Sir Alfred Dudley Pickman Rogers Pound, GCB, OM, GCVO (29 August 1877 – 21 October 1943) was a British senior officer of the Royal Navy. He served in the First World War as a battleship commander, taking part in the Battle of Jutland with notable success, contributing to the sinking of the German cruiser Wiesbaden. He served as First Sea Lord, the professional head of the Royal Navy, for the first four years of the Second World War. In that role his greatest achievement was his successful campaign against the German U-boats and the winning of the Battle of the Atlantic but his judgment has been questioned over the failed Norwegian Campaign in 1940, his dismissal of Admiral Dudley North in 1940, and Japan's sinking of Prince of Wales and Repulse in late 1941. His order in July 1942 to disperse Convoy PQ 17 and withdraw its covering forces, to counter a threat from heavy German surface ships, led to its destruction by submarines and aircraft. His health failed in 1943 and he resigned, dying shortly thereafter.

Born the son of Alfred John Pound, an Eton-educated barrister, by his marriage to Elizabeth Pickman Rogers, an American from Boston, Pound's maternal grandfather was Richard Saltonstall Rogers, but was also descended on his mother's side from Dudley Leavitt Pickman, an early Salem, Massachusetts, merchant. He was educated at Fonthill School in East Grinstead, Sussex. 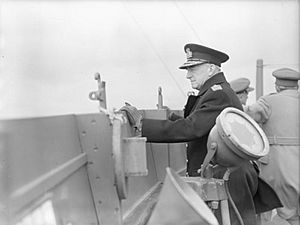 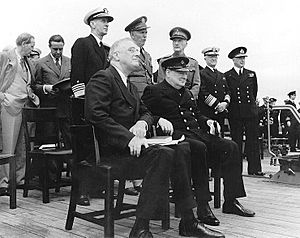 Admiral Pound (standing, far right) at the Atlantic Conference in 1941

Pound joined the staff at the Ordnance Department of the Admiralty in January 1909 and then, having been promoted to commander on 30 June 1909, he transferred to the battleship HMS Superb in the Home Fleet in May 1911. He joined the staff of the Royal Naval War College in early 1913 and then transferred to the battleship HMS St Vincent in the Home Fleet in April 1914. 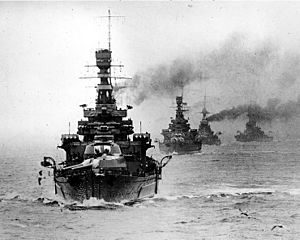 The battlecruiser HMS Repulse, which Pound commanded in the early 1920s

Pound served throughout the First World War. After being promoted to captain on 31 December 1914, he became an Additional Naval Assistant to the First Sea Lord before being given command of the battleship HMS Colossus in May 1915. He led her at the Battle of Jutland with notable success, contributing to the sinking of the German cruiser Wiesbaden. He returned to the Admiralty in July 1917 to become Assistant Director of Plans and then Director of the Operations Division (Home) and was closely involved in the planning for the Zeebrugge Raid. 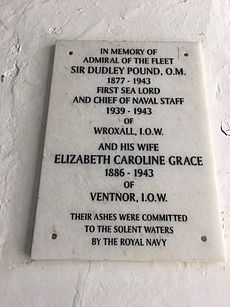 He died from the tumour at the Royal Masonic Hospital in London on 21 October (Trafalgar Day) 1943 and, after a funeral service in Westminster Abbey, followed by cremation at Golders Green Crematorium, his ashes were buried at sea in The Solent.

In 1908 Pound married Betty Whitehead; they had two sons and a daughter, Barbara.

All content from Kiddle encyclopedia articles (including the article images and facts) can be freely used under Attribution-ShareAlike license, unless stated otherwise. Cite this article:
Dudley Pound Facts for Kids. Kiddle Encyclopedia.