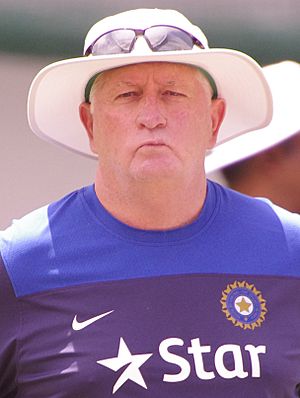 Duncan Andrew Gwynne Fletcher is a former Zimbabwe cricketer. He is a left hand batsman and Right arm medium fast bowler. He was born in 27 September 1948 in Salisbury (modern Harare), Southern Rhodesia (modern Zimbabwe). He was the former coach of India national cricket team. He was also the coach of England cricket team from 1999-2007. Fletcher played for Zimbabwe cricket team and took the team for victory in the 1982 ICC Trophy. But he had never played Test cricket.

All content from Kiddle encyclopedia articles (including the article images and facts) can be freely used under Attribution-ShareAlike license, unless stated otherwise. Cite this article:
Duncan Fletcher Facts for Kids. Kiddle Encyclopedia.