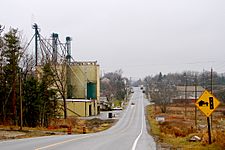 East Gwillimbury is a town on the East Holland River in the Regional Municipality of York. It is part of the Greater Toronto Area of southern Ontario, in Canada. It was formed by the amalgamation of the Township of East Gwillimbury with all the previously incorporated villages and hamlets within the township. The main centres in East Gwillimbury are the villages of Holland Landing, Queensville, Sharon, and Mount Albert. The Civic Centre (municipal offices) are located along Leslie Street in Sharon. The northernmost interchange of Highway 404 is at the North edge of East Gwillimbury, just south of Ravenshoe Road. The hamlets of Holt and Brown Hill are also within town limits.

The Sharon Temple is located in the village of Sharon, Ontario. It was designated as a National Historic Site of Canada in 1990. The site is composed of eight distinctive heritage buildings and dwellings, and houses 6,000 artifacts on a 1.8 ha. site. The Temple was constructed between 1825 and 1832 by the "Children of Peace", a Quaker sect led by David Willson on whose property it was built. 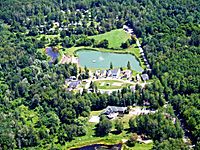 Bare Oaks Family Naturist Park is a naturist park located between the villages of Sharon and Mount Albert. It attracts thousands of visitors to East Gwillimbury and has a significant economic impact on area tourism. It has been in that location since 1972 when it was known as the Toronto Helios Society.

Ontario Highway 404 has been extended to just south of Keswick in the Town of Georgina, passing through East Gwillimbury. The town is served by three interchanges along Highway 404, namely Green Lane just North of Newmarket, Queensville Sideroad, and Woodbine Ave at the North end.

In 1913, all township records were destroyed in a fire at the clerk's office in Queensville.

All content from Kiddle encyclopedia articles (including the article images and facts) can be freely used under Attribution-ShareAlike license, unless stated otherwise. Cite this article:
East Gwillimbury Facts for Kids. Kiddle Encyclopedia.