East Kingston is a town in Rockingham County, New Hampshire, United States. The population was 2,357 at the 2010 census.

East Kingston was once a part of Kingston called Kingston East Parish, but was granted a separate charter in 1738 by Governor Jonathan Belcher. Several residents of East Kingston had petitioned Governor Belcher that its location was too distant from the Kingston school and place of worship.

The town grew up around the saw and grist mill at the Trickling Falls on the edge of Powwow Pond. Farms prospered on the good soil, and ice-cutting in the river was a thriving winter business before the age of refrigeration. The New England Brick Company was once a principal industry.

According to the United States Census Bureau, the town has a total area of 10.1 square miles (26.2 km2), of which 10.0 sq mi (25.9 km2) is land and 0.1 sq mi (0.3 km2) is water, comprising 0.60% of the town. The southern half of East Kingston is drained by the Powwow River, a tributary of the Merrimack River, while the remainder is drained by Great Brook, a tributary of the Exeter River, which ultimately drains to the Atlantic Ocean via Great Bay. A very small portion of 285-acre (115 ha) Powwow Pond on the Powwow River also lies within the town. Roughly the northern half of East Kingston lies within the Piscataqua River (Coastal) watershed, with the southern half of town located in the Merrimack River watershed. The highest point in town is the summit of Morse Hill, at 315 feet (96 m) above sea level.

There were 629 households out of which 38.3% had children under the age of 18 living with them, 73.9% were married couples living together, 4.6% had a female householder with no husband present, and 19.2% were non-families. 13.5% of all households were made up of individuals and 4.3% had someone living alone who was 65 years of age or older. The average household size was 2.84 and the average family size was 3.13. 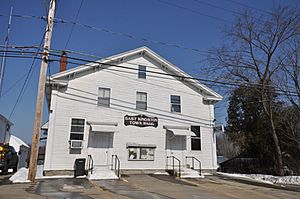 All content from Kiddle encyclopedia articles (including the article images and facts) can be freely used under Attribution-ShareAlike license, unless stated otherwise. Cite this article:
East Kingston, New Hampshire Facts for Kids. Kiddle Encyclopedia.