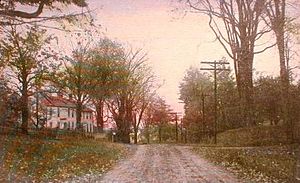 South Hampton was one of the first towns granted by Colonial Governor Benning Wentworth after the separation of the governorships of New Hampshire and Massachusetts in 1741. The border between the two colonies was fixed, and consequently South Hampton would be chartered in 1742 from former parts of Amesbury and Salisbury, Massachusetts. Over the years, the town lost territory to Hampton Falls, Seabrook and Newton, but gained territory from East Kingston in 1824.

The town's Justices of the Peace in 1831 were Parker Merrill, George W. Pillsbury, Benning Leavitt, John Palmer and A. Brown.

At one time, the town was home to over 12 different religious sects. One of South Hampton's only members of the New Hampshire State Senate was Benjamin Barnard, who served from 1806-1808.

There is only one school in South Hampton. Called Barnard School, it was originally just a small room, but then a school was built across the street. It is home to K-8 students, and once they become high schoolers, they move on to Amesbury High School in Massachusetts.

There were 301 households out of which 34.9% had children under the age of 18 living with them, 69.1% were married couples living together, 7.6% had a female householder with no husband present, and 18.9% were non-families. 13.0% of all households were made up of individuals and 6.3% had someone living alone who was 65 years of age or older. The average household size was 2.80 and the average family size was 3.07.

All content from Kiddle encyclopedia articles (including the article images and facts) can be freely used under Attribution-ShareAlike license, unless stated otherwise. Cite this article:
South Hampton, New Hampshire Facts for Kids. Kiddle Encyclopedia.