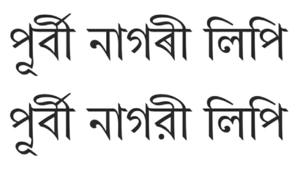 The Bengali–Assamese script (also Eastern Nagari script) is the fifth most widely used writing system in the world. It is the basis of the Bengali, Assamese alphabet and Tirhuta (a mix of Devanagari and Eastern Nagari). It is also used to write Bishnupriya Manipuri, Kokborok (Tripuri) and Meithei (Manipuri). Other languages, such as Angika, Bodo, Karbi, Maithili and Mising, were formerly written in Bengali–Assamese script. Modern Sylheti uses the alphabet, alongside Sylheti Nagari. It was originally used to write Sanskrit. Today, in Eastern India, the use of Eastern Nagari for Sanskrit continues.

The Bengali—Asamese script wasn't created to write a certain language, but it was the main script in the eastern regions of Medieval India. The script was also used to write Sanskrit. In this region, Hindu epics (Mahabharata, Ramayana etc.) were written in older versions of the Eastern Nagari script in this region. After the medieval period, Pali succeeded Sanskrit as the new written language in the region. The vernacular dialects of Pali eventually evolved into Bengali, Assamese and other related languages. Sankardev used the script in the 15th and 16th centuries to compose his writings in Assamese. Madhava Kandali used it to write the Assamese Ramayana in the 14th century. It was also used by the later Ahom kings to write the Buranjis, the Ahom chronicles, in the Assamese language. There is a rich legacy of Eastern Indian literature written in this script, which is still occasionally used to write Sanskrit today.

Like Devanagari, Eastern Nagari also uses dozens of consonant clusters. They are represented by different and sometimes quite irregular characters. Thus, learning to read the script is complicated by the large size of the full set of characters and character combinations, numbering about 500. While efforts at standardizing the script for the Bengali language continue in such notable centers as the Bangla Academy in Dhaka (Bangladesh) and Paschimbanga Bangla Akademi in Kolkata (West Bengal, India), there isn't a uniform spelling for Bengali, as many people continue to use various archaic forms of letters. Among the various regional variations within this script, only the Bengali and Assamese variations exist today in the formalized system.

It seems that the need to typeset Eastern Nagari on computers will influence greatly its standardization. Since around 2001, there is work to develop Unicode fonts, and it seems likely that it will split into two variants, traditional and modern.

The script presently has 11 vowel letters, used to represent the seven vowel sounds of Bengali and eight vowel sounds of Assamese, along with a number of vowel diphthongs. All of these vowel letters are used in both Assamese and Bengali. Some of the vowels have different sounds depending on the word. There's a number of vowel distinctions who are preserved in the writing system but they are not pronounced as such in modern spoken Bengali or Assamese. For example, the script has two letters for the vowel sound [i] and two letters for the vowel sound [u]. This difference arised from the time when Eastern Nagari was used to write Sanskrit, a language that had a short and a long and a short and a long. These letters are preserved in the script with their traditional names of "short i" and "long i", etc., despite that they are no longer pronounced differently in ordinary speech.

Two additional modified Vowels, অ' and অ্যা, are not considered letters of the Eastern Nagari script, but are often used in Assamese and Bengali (respectively) to represent certain vowels when the intended pronunciation would otherwise be ambiguous. The latter vowel, which is used in Bengali, is used frequently to transcript texts originally written in other alphabets, most notably Latin.

Vowel signs can be used in conjunction with consonants to modify the consonant's pronunciation (e.g. ক, kô). When there isn't a vowel diacritic symbol, the vowel "অ" (ô) is the default vowel for the consonant. For example, under this rule, the letter চ is pronounced cho. To note the absence of a vowel, a hôsôntô (্) may be written underneath the consonant, e.g. দ্ d.

The names of the consonant letters in Eastern Nagari are typically just the consonant's main pronunciation plus the inherent vowel "অ" ô. Since the inherent vowel is not written, most letters' names look identical to the letter itself (e.g. the name of the letter "ঘ" is itself ঘ ghô, not gh). Some letters that have lost their distinctive pronunciation in Modern Assamese and Bengali are having the same pronunciation with other letters. For example, since the consonant phoneme /n/ is represented by the consonants ন, ণ, or ঞ (depending on the spelling of the particular word). These letters aren't called simply nô. Instead, they are called "dental nô", "cerebral nô" and niô. Similarly, the phoneme in Bengali and in Assamese can be written as "palatal shô/xhô" শ , "cerebral shô/xhô" ষ, or "dental sô/xô" স, depending on the word.

Eastern Nagari script has its own set of digits.

All content from Kiddle encyclopedia articles (including the article images and facts) can be freely used under Attribution-ShareAlike license, unless stated otherwise. Cite this article:
Eastern Nagari script Facts for Kids. Kiddle Encyclopedia.