Eaton Canyon is a major canyon beginning at the Eaton Saddle near Mount Markham and San Gabriel Peak in the San Gabriel Mountains in the Angeles National Forest, United States. Its drainage flows into the Rio Hondo river and then into the Los Angeles River. It is named after Judge Benjamin S. Eaton, who lived in the Fair Oaks Ranch House in 1865 not far from Eaton Creek.

The most well-known portion of the canyon is the Eaton Canyon Nature Center in Pasadena, California. The trailhead of the Mount Wilson Toll Road is in the canyon.

Eaton Canyon is in the foothills of the San Gabriel Mountains. Originally called "El Precipicio" by the Spanish settlers because of its steep gorges, the canyon falls under several governmental jurisdictions.

Benjamin Eaton was hired by Don Benito Wilson to bring water to the Fair Oaks Ranch. In August 1877, naturalist John Muir set out from Pasadena for an expedition into the San Gabriels. He writes: "On the first day of my excursion I went only as far as the mouth of Eaton Canyon, because the heat was oppressive, and a pair of new shoes were chafing my feet to such an extent that walking began to be painful."

On October 27, 1993, the floor of Eaton Canyon, along with 118 surrounding homes, was devastated by a wildfire.

Eaton Canyon, view to the east from Pinecrest Drive

The Eaton Canyon Natural Area Park is located where the mountain stream debouches into the foothill wash at the base of the San Gabriel Mountains. The park is administered by the Los Angeles County Department of Parks and Recreation. The county administers the lower two-thirds of the area below the toll road bridge. Most of the 190 acres (0.8 km2) that comprises the natural area lie on the northern boundaries of the old Rancho San Pascual and Rancho Santa Anita on land designated for the Southern Pacific Railroad. Once the railroad gave up the land, it was opened for homesteading. The nature center is unique in the area because it houses exhibits that educate on the flora and fauna local to the San Gabriel Valley Southern California. The center was rebuilt in 1998 after the 1993 fire destroyed the previous facility.

Pasadena and parts of Altadena receive about 40% of their water from local sources. The upper third is controlled by the Water Department of the City of Pasadena. 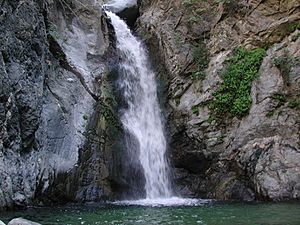 The falls are where the Eaton Creek has a fifty-foot drop and are located north of the bridge in the part of the canyon administered by the US Forest Service. John Muir once described the waterfall as "a charming little thing, with a low, sweet voice, singing like a bird, as it pours from a notch in a short ledge, some thirty or forty feet into a round mirror-pool."

Several waterfalls also exist above Eaton Fall, which are more secluded. Until 1979, there was a tunnel which allowed access, but this has been dynamited and filled in. While the upper falls were accessible decades ago, there are no longer any maintained trails. People have been injured and killed trying to make these climbs via unofficial trails.

The Eaton Canyon Golf Course is a regulation 9-hole course featuring narrow fairways and rolling terrain. It is administered by the Los Angeles County Department of Parks and Recreation and has been open since 1962. 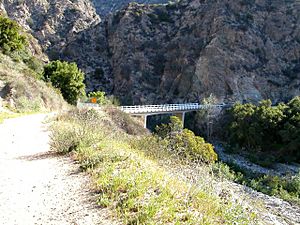 The Mount Wilson Toll Road (1891–1936) is a historic roadway which ascended Mount Wilson via a vehicular passable road from the base of the foothills in Altadena. It was accessible from Pasadena via Santa Anita Avenue which drove right to the front porch of the toll house. The road is still accessible from Pinecrest Drive, just off Altadena Drive in Altadena. Access was blocked after a 2005 landslide destroyed 50 yards of the road, but the road has since been rebuilt and reopened.

Mount Wilson had always been active with human passage starting from the days of the local Indians. It was Benjamin Davis Wilson who established a proper trail to the summit of Mt. Wilson from Sierra Madre through the Santa Anita Canyon. The Mt. Wilson Toll Road to Henninger Flats is controlled by the Forester and Fire Warden of the Los Angeles County Fire Department. 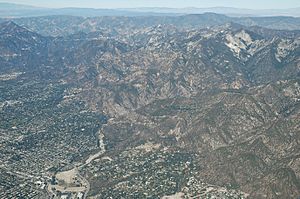 Eaton Canyon, reservoir and wash from the air

Emerging from the foothills and flowing south, the Eaton Creek becomes the Eaton Wash, whose drainage flows into the Rio Hondo river and then into the Los Angeles River. The wash is one of the Altadena streams that helps to feed to Raymond Basin. Rubio, Las Flores and others all flow to the east eventually to join the Rio Hondo. Millard Canyon on the west flows to the Arroyo Seco. Eaton Wash is one of the two major streams that channels storm water in Pasadena; the other is the Arroyo Seco on the western side of the city.

On its way to the Rio Hondo, the Eaton Wash is joined by the combined drainages from Pasadena Glen and Hastings Canyons. These channels have all been modified by flood control dams near the base of the mountains, and both have been confined to manmade channels or storm drains in their lower reaches. Typically the Eaton Wash and Arroyo Seco carry very little water. Peak discharges are typically less than 1,000 ft³/s (30 m³/s) for Arroyo Seco and less than 500 ft³/s (15 m³/s) for Eaton Wash.

All content from Kiddle encyclopedia articles (including the article images and facts) can be freely used under Attribution-ShareAlike license, unless stated otherwise. Cite this article:
Eaton Canyon Facts for Kids. Kiddle Encyclopedia.